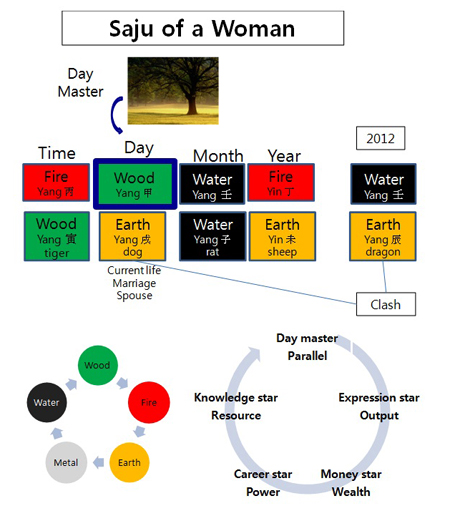 Nobody wants to hear anything negative when their saju is read. It doesn't matter how successful one is now. People can't be assured of their future and because of that uncertainty, they fear to seek out fortune tellers while at the same time they are insatiably curious. I am often asked not to reveal upcoming misfortune if there is any. This is mostly for those who consider life is running well enough and they don't want to think about any possibility that might ruin their current happiness. Obviously everyone wants to hear only positive prospects.

Our lives are not so simple, however, as we all acknowledge sorrowfully. This is a well known irony. Most people experience twists in life. Success is often accompanied by misfortune, or vice versa, like heavy rain is followed by a rainbow. Once people sense a certain negative wave in life, they consult a fortune teller. In this moment, despite their fear, they want to hear the truth.

One of The Fortune Tellers I know told his best friend that his lover was going to die soon. It was worse because the fortune teller arranged the match for the couple. Although they all knew how serious her disease was, the couple overcame hardships to marry recently.

I doubt whether it is right for the fortune teller to convey what he read as it was. It would not be a problem if it was said before the couple fell in love. To tell the truth or to lie for emotional happiness is a perennial question for all fortune tellers. I have a firm view that a fortune teller must deliver readings after careful contemplation. In order to avoid any chance of misleading someone through a wrong judgment, although not intended, the fortune teller must give it a second thought before delivering. Despite the fact that destiny is fixed from birth, according to saju, there is still some subtlety to modulate the waves of life a little, sometimes by effort or by other external factors, such as ambient environment or other's support. A great fortune teller knows how to circumvent upcoming misfortune.

I received a call from one of my previous clients. She abruptly said, "You were right". Then, she explained what happened to her this year. Last year, when she had consulted me for a saju reading, I advised that she would have a problem in her uterus. I also foretold that a small operation would help her sidestep possible misfortune. At that time, she agonized about her boyfriend and couldn't make decision whether to continue seeing him or not. She didn't have any problem with her health at that moment and of course had no plan for an operation.

When she visited me this time, she said a myoma was found in her uterus and her doctor advised the relevant operation. On the other hand, there was good progress in her relationship with her boyfriend.

Here is another story. This is a woman's saju born in 1967. She runs a taekwondo studio with her husband. She doesn't seem to have any worries economically or emotionally. However she was overly worried about her husband. Upon reading her saju, I told her not to worry. It was actually because of the fact that her energy, wood was abundant, while lacking metal. The metal element represents her husband and it is required to trim the rich tree.
In this year, there is a clash between the coming year's energy and her day branch. As the day branch denotes one's married life and spouse at the same time, it could have meant a certain problem related to her husband. I comforted her that a small accident might diminish the upcoming misfortune.

Early this year, during a field trip with students in her studio, she pulled a ligament in her ankle and was hospitalized for a couple of weeks. She was happily surprised and called me to confirm she had a small accident. She actually enjoyed staying in the hospital and nothing worse happened after that.

Information: Are you interested in learning more about the ancient Chinese teaching about the "Four Pillars of Destiny?" For further information, visit Janet's website at www.fourpillarskorea.com, contact her at 010-5414-7461 or email janetshin@hotmail.com.

The writer is the president of the Heavenly Garden, a saju research center in Korea, and the author of "Learning Four Pillars".