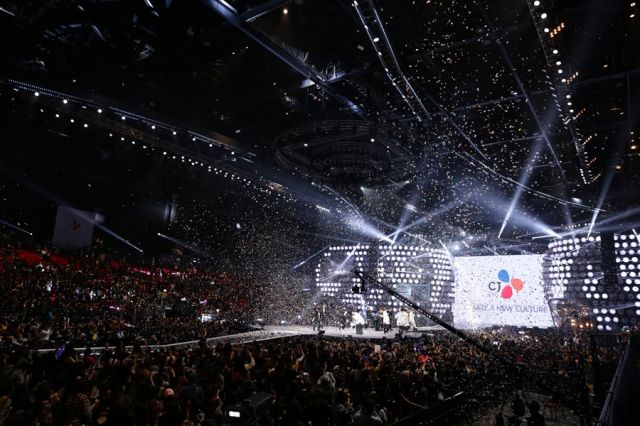 The 2014 Mnet Asian Music Awards (MAMA) was successfully held in Hong Kong on December 3 announced Asia's leading content and media company CJ E&M today. In its sixth year since evolving into Asia's premier music festival, MAMA's impact has spread far beyond its origins in Korea to across Asia and other parts of the world.

2014 MAMA returned to Hong Kong to leverage the city's status as a focal point of Asian economy, trade, and cultural diversity. Acclaimed for its advanced stage production and mega-scale performances, MAMA also has been instrumental in introducing the latest K-Pop trends and Korea's high-end production system to global audiences.

Introducing world-top celebrities including EXO, Taeyang, Andy Lau and John Legend, the show has established phenomenal cultural roads by reaching 2.4 billion viewers as well as garnering 68 million online votes worldwide. The arena was filled with 10,000 fans from China, Japan, Indonesia, Taiwan, Thailand, the U.S., South America and Europe among others.

2014 MAMA partnered up with the Large & Small Business Cooperation Foundation, part of Small & Medium Business Administration of Korea to support small- and mid-sized companies that are in pursuit of expanding its business abroad, faithfully playing a role of international marketing platform.

Girls' education, a campaign that provides young girls in the developing countries with opportunities for education along with UNESCO was another wonderful project of MAMA, which attached more value to the festival.

"MAMA is the essence that shows the endeavors and investment CJ has made in the cultural industry for the last 20 years. It has its roots in K-pop but has constantly transformed into a new platform that has significant influence on culture, economy and society beyond a mere awards presentation ceremony. This year, in particular we played an important role for shared growth and co-existence through the partnership with the Small & Medium Business Administration of Korea and UNESCO and made substantial contributions with our philanthropic work globally. Going forward, we will put ceaseless efforts to be at the vanguard in the path for Korea to become the epicenter of Asian culture", Kim Sung-su, CEO of CJ E&M remarked.

Light up the Cultural Roads towards MAMA
MAMA, known for its creative and provocative performances, concluded another annual event under the theme, "Beat TV". The main show had many spectacular performances and collaborations that will be remembered forever. The best K-Pop artists of 2014 including EXO, Taeyang, G-Dragon, Seo Taiji, INFINITE, SISTAR, BTS, Block-B, Girls' Day and multi-international artists like John Legend gathered to perform at Asia's biggest music extravaganza.

EXO was awarded "UnionPay Album of the Year" and Taeyang received "UnionPay Song of the Year" proving their status as the most popular K-Pop boy idoles with performances of "Overdose"and "Eyes, Nose, Lips" repectively.

This year's online voting, which started on October 27 and was held for a month attracted the most people in the history of MAMA. In total of 68 million fans from 210 countries signed onto its official website to vote for their favorite artists. The number soared 4.5 times from the last year. In particular, 91% of the votes came from outside of Korea, indicating that the ceremony is not a regional event but a global festival with effervescent support worldwide. People from all sorts of background became one through music regardless of nationality, race, generation, culture and genre.

As the production staff revealed their ambitions, "We are going to open the new world of music that communicates with you under the notion of 'Beat the TV. The new world of music has arrived. Beyond just watching TV, enjoy together and share it together'", people were able to enjoy this year's MAMA wherever they were and what time it was there through various platforms.

MAMA's broadened ripple effect on culture, society and economy –CJ's outstanding global leadership.
The more broadened cultural influence enabled MAMA to transform into a global cultural platform creating economic and social values. CJ has showed its global leadership; it has been at the forefront for shared growth and co-existence by supporting the small- and mid-sized business from Korea to go global.

2014 MAMA along with the Large & Small Business Cooperation Foundation, part of Small & Medium Business Administration of Korea supported 57 companies in the beauty and fashion industries that show the most potential to exhibit their products and make inroads into the global market. The companies in the beauty industry have cosmetic and hair products and the fashion industry with clothing, hats, bags and accessory lines that are most profitable in relation with cultural contents of 'Hallyu', the Korean wave.

CJ E&M prepared a joint exhibition hall with its interior decorated like a backstage of MAMA. 'Biz-Matching' booths were arranged for individual business meeting with Chinese buyers and distributors. Promotional marketing in relation with MAMA was also provided both domestically and internationally.

MAMA is the first and only award ceremony in pop music industry UNESCO chose to partner up with.
Launched by the leading Korean conglomerate CJ Group and UNESCO last November, the new campaign 'Bright Girls. Brighter Future!' aims to help address the lack of access to quality education faced by girls and young women in developing regions, which not only prevents them from reaching their full potential but also hampers economic growth and social progress.

More than 150 celebrities have shown their support, offering video endorsements and donating more than 220 personal items for auction. Auction items include complete sets of bronze handprints of the members of EXO, Girls' Generation, SISTAR, and SHINHWA, attire worn by the members of Crayon Pop, and CNBLUE, a bag of Lee Hyori, and original scripts of popular Korean dramas autographed by the stars of the dramas. All the proceeds from the auction will go to charities through UNESCO for girls in the developing countries to get a better education.

In support of the campaign, Oscar-winning actor and the honorable UNESCO Special Envoy for Peace and Reconciliation Forest Whitaker delivered a video message for girls' education at 2014 MAMA. In the video, he welcomed the new campaign 'Bright Girls. Brighter Future!' by saying, "There lies our pledge to give every girl, everywhere, the opportunity to become everything she wishes". He continued, "We must stand together to affirm that every girl deserves the opportunity to get the quality education that society as a whole will benefit from! This quest is for each and everyone of us to pursue. Let everyone join us in this campaign. Let's make a difference, together".

"'2014 MAMA' Paved Phenomenal Cultural Roads across Asia"
by HanCinema is licensed under a Creative Commons Attribution-Share Alike 3.0 Unported License.
Based on a work from this source