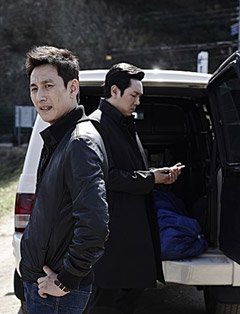 A scene from the film "A Hard Day"

The Korean action thriller "A Hard Day" had drawn more than 3 million moviegoers by last weekend, about a month after its release despite a lackluster opening week.

It reached the No. 1 spot at the domestic box office for just two days but has hung on to the No. 2 or 3 spots for most of the past month, despite a fierce onslaught from Hollywood blockbusters like "Transformers: Age of Extinction".

So far this year, the Korean film "Miss Granny" and Wes Anderson's "Grand Budapest Hotel" have been steady sellers.

The box-office success or failures of most movies is determined within a week. Often a rival film snatches the limelight after the first week of a film's release or it garners negative word of mouth, leading to a marked drop in viewers in ensuing weeks.

Even many Hollywood blockbusters have a tough time staying in the top 10 rankings for more than a month. After showing in 800 to 1,000 theaters in the first one to two weeks after release, they cede their spots to newer blockbusters.

But "A Hard Day", which attracted 80,000 viewers on its first day of release, saw the number rise by around 20,000 in its second week and continues to attract viewers in theaters well into a month after its release.

Steady sellers perform differently than ordinary movies. "Grand Budapest Hotel", which ranked at No. 14 when it opened on March 19, rose to the No. 2 and 3 spots in its second and third week after release and has drawn 770,000 viewers so far.

Some steady sellers even become bestsellers. When it opened, "Miss Granny" was overshadowed by the animated film "Frozen" but it eventually pulled more than 8.65 million viewers to become the most successful Korean film so far this year.