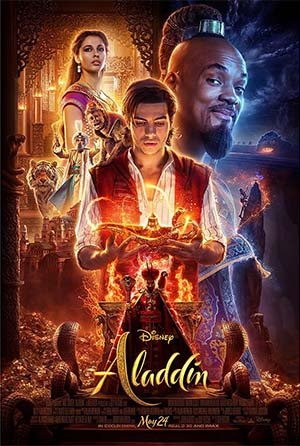 The musical fantasy film "Aladdin" is attracting more and more viewers thanks to strong word of mouth and closing in on the 6-million mark about a month since its release.

The film sold 413,422 tickets on Sunday and 131,239 on Monday to top the box office, the Korean Film Council said on Tuesday, taking the accumulated number of viewers to 5.46 million.

Palme d'Or winner "Parasite", which had dominated the box office since its release on May 30, dropped to second place with 241,615 tickets sold on Sunday and 105,174 on Monday. The film has attracted 8.45 million viewers so far.

"'Aladdin' Continues to Go Strong at Box Office"
by HanCinema is licensed under a Creative Commons Attribution-Share Alike 3.0 Unported License.
Based on a work from this source