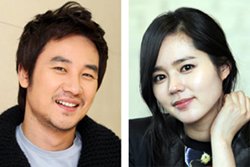 The stars of "Architecture 101" received presidential commendations on Monday during a Taxpayers' Day event at COEX in Seoul.

Uhm Tae-woong, the male lead of the film, has paid his taxes faithfully for the last three years, while Han Ga-in, his female counterpart, was recognized for her work as promotional ambassador for UNICEF Korea.

The two have also been named promotional ambassadors for the National Tax Service.

"'Architecture 101' Stars Get Presidential Honor"
by HanCinema is licensed under a Creative Commons Attribution-Share Alike 3.0 Unported License.
Based on a work from this source