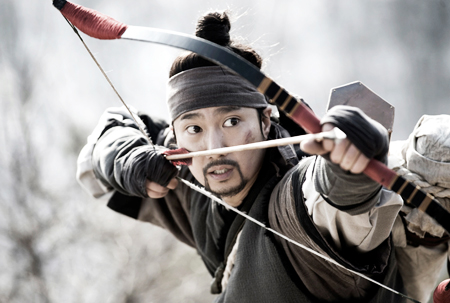 Finally, a film that ties enduring soul-searching themes with exhilarating action and dashes of tasteful comedy, all set in a familiar yet exotic backdrop.

"Arrow, The Ultimate Weapon", a well-directed and craftily edited "kill all with a single arrow" period piece, could have consulted a better VFX supervisor. Still, it offers thrilling, multi-textured entertainment that makes modern snipers seem boring. Strong box office sales are highly probable along with ancillary potential overseas as distribution rights have been sold to 13 countries.

Director Kim Han-min does an excellent job of telling a very simple story in a very involving way, by harnessing the talents of its exceptional cast to full cinematic ends. The prolific actor Park Hae-il eases into his first period piece with finesse as the spiritually torn archer during the 17th-century Joseon Kingdom.

In a society dictated by oppressive Confucian rules, Nam-i has inherited from his father not only fiendish archery skills but also the title of traitor when the throne changes hands. After witnessing his father's death, the prepubescent Nam-i manages to escape with his little sister Da-in (Moon Chae-won) to find refuge in the home of old family friend Kim. Thirteen years later, he is leading a futile existence in which his talents are useful only for hunting game. His only reason for living - protecting his sister - remains intact, in keeping with his late father's last request.

When the well-meaning gentleman Seo-gun (musical actor-turned-emerging screen star Kim Moo-yul) asks for Da-in's hand in marriage, Nam-i decides to leave town. However, Qing Chinese soldiers break up the wedding and take Da-in, Seo-gun and some 50,000 other Koreans as hostages to Manchuria.

Here the film gives a cinematic twist to the historic event. Equipped with only his father's old bow and handmade arrows, our protagonist sets off to save his beloved sister. What makes the film more intriguing is that Da-in is not the typical damsel in distress; Moon brings to screen a fresh heroine that is at once feminine and feisty, which is rare in Korean cinema.

Seasoned actor Ryu Seung-ryong plays yet another villain as Jushinta, the head of a group of deadly bow-and-arrow-equipped assassins, but brings a more mature characterization and commanding presence.

Moreover, Ryoo, Moon and other members of the cast make an attempt to speak Manchu. Initially there is something "Gag Concert"-esque about the actors articulating the near-extinct language, but the film employs the linguistic glitches as an effective tool to push forth the narrative.

The film skips over unnecessary details in depicting the loss of innocence and establishing the reason why Nam-i so singlehandedly braves the mission, and presents instead one sequence of heart-thumping sniper scenes after another. While foreshadowing elements involving a tiger and the lone heroic fight invite inevitable comparisons to Mel Gibson's "Apocalypto", this film brings something more.

"Arrow, The Ultimate Weapon" points to a promising future for Korean cinema amid the opening of big-budget films one after another only to offer fast, forgettable entertainment. It demonstrates that honest and original writing for the screen is still possible by weaving thoroughly Korean values and sentiments into Hollywood scenarios - but here the Korean preaching of forgiveness is not a hindrance for non-Koreans but a uniqueness that differentiates itself.

For a film that cost 9 billion won ($8.5 million), "Arrow" has exceptional production values crowned by impressive sound design that capitalizes on the versatility of the titular weapon. Sure, the audience has seen Russell Crowe wield the bow and arrow as Robin Hood, but the director, who says he grew up near an archery range, inspires newfound appreciation for the traditional weapon.

Kim previously attempted to fictionalize a 1980s murder case in "Paradise Murdered", a muddled concoction of horror and mystery, before delving into twisted behavioral patterns in "Hand Phone", which could have toned down the contrived drama. Kim's more focused direction in "Arrow" demonstrates the strengths of both those flawed films.

Three-and-a-half out of four stars.

"'Arrow' aims for new horizons"
by HanCinema is licensed under a Creative Commons Attribution-Share Alike 3.0 Unported License.
Based on a work from this source