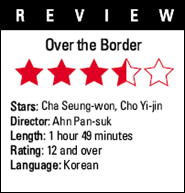 The situation in the war-torn Korean Peninsula has been an important motif in many local films.

In recent years, however, their main focus has shifted from the severe conflict between the two Koreas to individual tragedies and experiences.

The latest film "South of the Border (Kukkyongui Namjjok)", takes an even more personal look at the tragic situation and moviegoers may find it just another typical melodrama if they don't pay much attention to the fact that it is the first to deal with the lives of North Korean defectors in Seoul.

Directed by Ahn Pan-seok, the film revolves around Kim Sun-ho (played by Cha Seung-won), who is a horn player in an orchestra in North Korea.

As he belongs to a comparatively high class in his country, Sun-ho enjoys his life and has plans to marry his girlfriend Yon-hwa, whom he is very much in love with.

One day, Sun-ho's family receives a letter from his grandfather in Seoul, whom they had thought was dead. They begin to exchange letters, but this puts their family in great danger so they decide to defect to the South.

Sun-ho is devastated because he can't take Yon-hwa with him but he promises to take her to Seoul as soon as possible after arriving in the South.

In Seoul, he tries to save money to help her escape from the North. But one day, Sun-ho hears that Yon-hwa has married another man. He becomes hopeless but later tries to find a way to adapt himself to life in the South.

The film keeps a certain distance from political and social stances and doesn't touch upon any controversial aspects of the lives of North Koreans. You may think that the struggles by North Korean defectors to seek a new life are not realistically portrayed in the film.

As director Ahn is a famous television drama producer and this is his film directorial debut, he uses many flashbacks and somewhat detailed explanations as he did in his popular TV drama series.

But the film in many ways maintains the core elements of a melodrama that you can find enjoyable. It has many formulas often seen in other conventional melodramas _ happy moments shared between a couple and their separation and reunion _ but they are not cliche as they have a North Korean touch.

The dating scenes of Sun-ho and Yon-hwa are quite impressive as you get a glimpse of Pyongyang streets and an amusement park, thanks to well-recreated sets and computer graphics.

Overall, it's a new and interesting attempt at imparting the lives of North Koreans; the film shows that it is possible to do so without propaganda themes such as those that depict North Koreans as no longer enemies but neighbors, which have often appeared in such action-packed dramas as "Shiri" (1998), "JSA - Joint Security Area" (2000) and "Taegukgi: The Brotherhood War" (2004).

"'Border,' Personal Stories of NK Defectors"
by HanCinema is licensed under a Creative Commons Attribution-Share Alike 3.0 Unported License.
Based on a work from this source