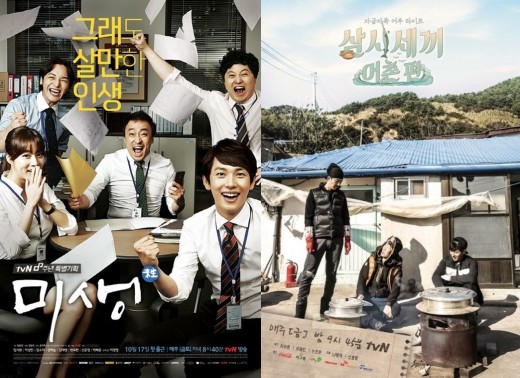 CJ E&M channel was crowned winner of 5 awards at Cable TV Awards, which suits their stance as a leader among cable broadcasting companies.

Cable TV Awards was held at Dongdaemoon Design Plaza in the afternoon on March 13th.

"Incomplete Life" was the winner of Grand Award on this day. As Im Si-wan and Kang Ha-neul were awarded for 'Star Award – Actor' category, the drama took three awards home.

Producer Kim Won-seok of "Incomplete Life" said, ""Incomplete Life" was like a dream for me. It's a drama I've been dreaming about for a long time. It was not easy to wake up from the dream. The script made us cry and laugh just by reading it. The script always came out in front of us before the filming started each time. The already established actors tried even harder to prepare in advance with the script. No actors disappointed me on the set. They always touched my heart".

He also said "I will make dramas that can come closer to viewers and appeal more". Producer Kim Won-seok celebrated their achievement along with Im Si-wan and Kang Ha-neul.

Producer Na Young-seok's acceptance speech was also impressive. He was awarded 'Special Award' and 'Project Award'. Producer Na Young-seok said, "I'm truly grateful. I could achieve the result thanks to the base our senior fellow workers have been built up for the last 20 years (in cable TV industry). I'd like to thank our senior fellow workers who have worked hard".

The award ceremony was prepared to celebrate the 20th anniversary since the formation of cable TV industry. Awards were presented for the categories including Producers, Writers, Planned Report, Announcer & Reporters, Professional MC, Project Award, and Star Award.

"'Cable TV Awards' 'Incomplete Life' and producer Na Young-seok sweep awards"
by HanCinema is licensed under a Creative Commons Attribution-Share Alike 3.0 Unported License.
Based on a work from this source