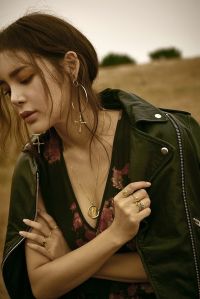 Actress Park Si-yeon was in a car accident while moving drama filming locations on the 18th.

She was moving for filming of MBC drama "Bitter Sweet Life" when she was involved in an accident. She is currently receiving treatment at a local hospital emergency room.

A representative from her company said, "The car that Park Si-yeon was in collided with the car in front. There weren't big injuries but her jaw was injured and she is in a state of shock".

"We will join filming as soon as she recovers".

The new drama "Bitter Sweet Life" is planned to air in May, and she will be acting with Oh Yun-soo and Lee Dong-wook.

"'Car accident' Park Si-yeon 'Jaw injury.. receiving treatment'"
by HanCinema is licensed under a Creative Commons Attribution-Share Alike 3.0 Unported License.
Based on a work from this source