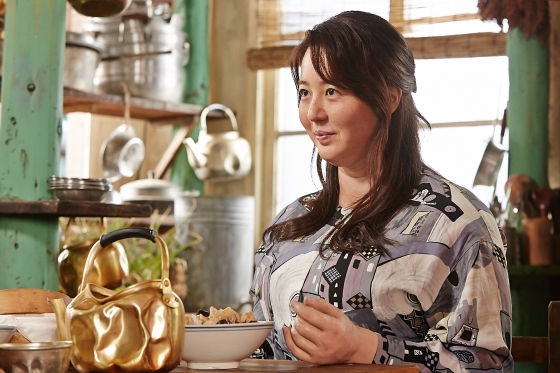 The production team of 'Chronicle of a Blood Merchant' released a still image of actress Yoon Eun-hye, who transformed into a heavy-set woman.

According to Next Entertainment World, distributor of film, 'Chronicle of a Blood Merchant' on January 36th, Yoon Eun-hye took on the role of a village girl, Im Boon-bang, and she tried a new challenge in her acting for the role. She turned herself into a heavy-set woman of 100Kg through a special makeup and costumes.

She made outstanding presence by acting with unsophisticated look and intimate voice tone while she naturally constructed the character, Im Boon-bang, who causes misunderstanding between Heo Sam-gwan and his friend, Mr. Ahn.

Director, Ha Jung-woo explained, "Although the character, Im Boon-bang may belong to someone chubby and be of an easygoing image, I offered the role to Yoon Eun-hye who has an opposite appearance to the character. She accepted the offer pleasantly. Even though the portion for her appearance in the film is short, I'd like to give her big applause for being flexible and the new challenge as an actress".