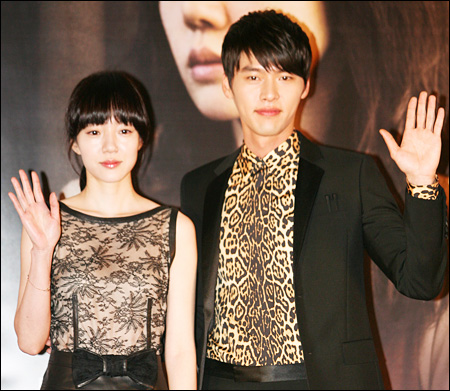 ActorsIm Soo-jeong, left, and Hyun Bin pose for a photo at a press conference for the movie "Come Rain Come Shine" at Dongdaemun CGV in Seoul, Thursday. / Courtesy of Bom Film Productions

The movie follows the story of a couple who have been married for five years. The wife, played by Im, falls in love with another man and decides to tell her husband (Hyeon) about it.

Director Lee Yoon-ki ("This Charming Girl", "My Dear Enemy") is known for his delicate portrayal of emotions. The three-hour confrontation between the couple on screen is told almost in real-time.

"In the film, the wife decides to leave her husband because of her new lover. However, she falters as he packs her luggage without a word", Im said at a press conference at Dongdaemun CGV, central Seoul, Thursday. She added that it was her first time to play the role of a married woman.

"There is no right answer in love, and various feelings that come from love are seen through this movie".

Hyun, the talk of the town for his role as Kim Ju-won in the SBS drama "Secret Garden", said being invited to the Berlinale was the happiest thing for him with regards to the movie. His other film "Late Autumn- 2010", co-starring Tang Wei and scheduled to be released in Korea on Feb. 17, will also be screened at the festival.

"There are many producers and directors dedicated to the diversity of Korean movies, but many productions are in financial trouble", Im said. "I was happy to support a movement to make better movies".

Lee said he did not know the exact reason why the movie was selected to compete at the prestigious German festival.

"We don't usually consider being invited to film festivals when we shoot", he said humbly.

He recommended the audience become immersed in the emotional exchange between wife and husband.

"I wanted to reveal a sense of loneliness between the two characters and the actors successfully portrayed the subtle sentiment", Lee said. "The house itself is the third character in this movie, as memories are compiled within".

"Come Rain Come Shine" will be in theaters Feb. 24.

"'Come Rain Come Shine' invited to Berlinale "
by HanCinema is licensed under a Creative Commons Attribution-Share Alike 3.0 Unported License.
Based on a work from this source