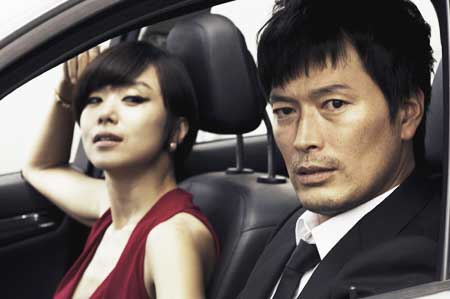 There have been many films in recent Korean cinema capitalizing on the adrenaline rush of cat-and-mouse chases. An ambitious project brings together top actors Jeon Do-yeon and Jung Jae-young for such a hunt.

"Countdown" remains true to its name in that it sets up a time restriction for a terminally ill bounty hunter (Jeong) to receive a liver transplant from a high-flying con artist (Jeon). It makes for an extremely busy story jam-packed with everything from the hilariously implausible to the relentlessly tragic - but not for a particularly entertaining one.

Directed and co-written by the debuting Heo Jong-ho, the film showed promise as it was invited to premiere at the Toronto International Film Festival earlier this month. Though the big-name stars will most likely draw in the first batches of crowds in the local box office, the shining talents of the lead duo dim as their characters undergo rather odd developments, and as the film finds a surprising saving grace in idiosyncratic supporting actors.

Tae Gun-ho (Jeong) isn't afraid of pulling off Spider-Man-style feats as he climbs up the facade of buildings to collect debts, but he is forced to accept his own mortal limitations when he is diagnosed with terminal liver cancer. Tae has only 10 days to find a compatible organ donor, and learns that Cha Ha-yeon (Jeon) has benefitted from his late son's organ donation. He is relieved to learn Cha is set to be discharged from prison the following day.

Things become complicated as Tae realizes he isn't the only one awaiting her release.

Cha is a master fraudster that manages to swindle hundreds of millions of won in a half-hour even after admitting her fraudulent intentions, and she has, not surprisingly, many enemies.

She pulls off various wigs and props to fool those chasing her, such as a sleazy Korean-Chinese gang boss (Oh Man-seok), a comical, short-tempered version of Kim Yun-seok's tragically heartless Yanbian character in "The Yellow Sea".

Until this point there is nothing unusual or daring in the initial car chase through market alleyways, frightening chickens and the like.
Things get a little more interesting when Cha persuades Tae to help her track down Jo Myeong-seok (Lee Kyung-young), the man responsible for her imprisonment and guilty of even more heinous heists.

In order to secure Cha's liver, Tae finds himself in one bizarre situation after another. He meets the notorious Jo in Busan, where he operates a pyramid scam involving a "sex posture enhancement" machine and showcases the most jaw-dropping recipes for boilermakers.

At this point, Tae is growing tired and listless, but his desperate struggles are eclipsed by Oh's droll Chinese-accented jokes and Lee's crude obscenity.

Jeon on the other hand moves fluidly, looking impeccably gorgeous as her character always manages to be two or three steps ahead to fool everyone.

However, the film takes a deceptive turn as it becomes clear that it is neither heart-thumping chases nor odd characters that are meant to propel the narrative.

Before adopting the title "Countdown", the film had the working title "My Son" - the action thriller thus turns out to be a melodrama in disguise, one speaking about the virtues of parental love.

Tae suffers from partial memory loss as a result of his son's traumatic death. Cha on the other hand has a motherly secret of her own that is supposed to add a more sympathetic edge to her character in the tradition of "Lady Vengeance".

These elements provide interesting plot ideas, but in practice confound viewers expecting action-packed thrills with suddenly having to shed tears through conventional soap opera tricks. As a result, "Countdown" loses track of its narrative direction and characters seem alone in being pressed with time.

A Sidus FNH release, "Countdown" is now showing in theaters.