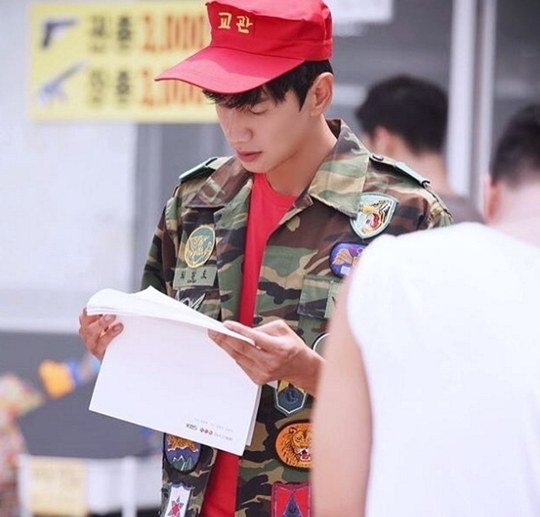 The behind-the-scenes still image revealed on the official Instagram of the drama is from the episode one.

In the image, Lee Kwang-soo is wearing a military uniform and a red hat with a mark that says 'Drill instructor'. When Lee Kwang-soo made the surprise appearance, he played a student working part time, who served Yoo Si-jin (Song Joong-ki) and Seo Dae-yeong (Jin Goo) unenthusiastically. Lee Kwang-soo accepted the cameo role because of the special friendship with his best friend Song Joong-ki.

It seems that Lee Kwang-soo is studying his script of 'Descendants of the Sun' hard. KBS said on the official Instagram "He always does his best even when the filming is for only one cut!! #Lee Kwang-soo #Asia's Prince #Cameo #SpecialApperance".

"'Descendants of the Sun' reveals Lee Kwang-soo's behind-the-scenes still image "
by HanCinema is licensed under a Creative Commons Attribution-Share Alike 3.0 Unported License.
Based on a work from this source