'Descendants of the Sun' writer Kim Eun-sook vs 'My Love from the Star' writer Park Ji-eun, exciting match comes in November 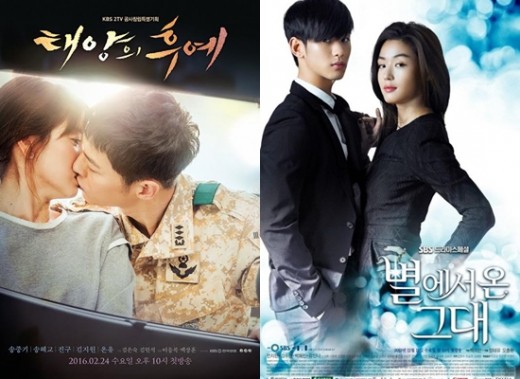 The exciting match between the two big name writers is coming in November this year. Kim Eun-sook with tvN's new drama, "Goblin" (working title) and Park Ji-eun with SBS' 'The Legend of the Blue Sea' are anticipated to fascinate their drama fans in November.

Both Kim Eun-sook and Park Ji-eun are star writers who have scored a huge success in terms of the quality of the material as well as the viewership rating. Park Ji-eun earned the trusted name as a writer with KBS 2TV 'My Husband Got a Family' and SBS "My Love from the Star". Kim Eun-sook with SBS 'Lovers in Paris' and "Secret Garden" listed her name as a star writer earlier than Park Ji-eun.

Although the airtime of their previous dramas did not fall in the same period, KBS 2TV's hugely popular drama 'Descendants of the Sun' created the well-matched success in the ratings of talkable topics compared to SBS "My Love from the Star", which drew the explosive popularity especially in Chinse community. Under these circumstances, as the forthcoming dramas by these two star writers are to compete with each other during the similar time period, drama fans are getting excited with the coincidence.

Kim Eun-sook's new drama, "Goblin" is about a goblin, who has amnesia, and a god of death. Gong Yoo and Kim Go-eun have been confirmed to headline the drama. Lee Dong-wook also has been confirmed for the drama.

Park Ji-eun's new drama, 'The Legend of the Blue Sea' stars Jun Ji-hyun and Lee Min-ho. The drama borrowed a motif from a mermaid story. The ace producer of SBS drama department, Jin Hyeok is in charge of this drama.

Both of the dramas show off the splendid cast. The critical point is the power of the story, which means the power of writing by the two writers. The projected airtime for "Goblin" will be most likely Friday & Saturday for now. And it will be Wednesday & Thursday for 'The Legend of the Blue Sea'. Although it seems that the airtime will not overlap, the match by the two star writers this November will be intense in and outside the dramas.

"'Descendants of the Sun' writer Kim Eun-sook vs 'My Love from the Star' writer Park Ji-eun, exciting match comes in November"
by HanCinema is licensed under a Creative Commons Attribution-Share Alike 3.0 Unported License.
Based on a work from this source