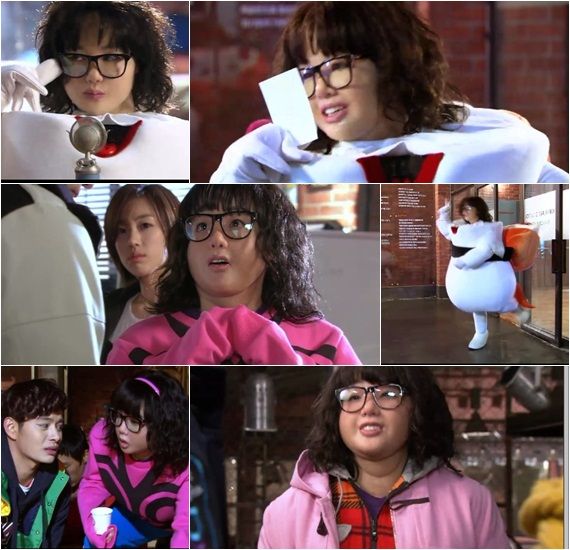 KBS 2TV new Monday Tuesday drama 'Dream High' IU has finally taken off the veil and has appeared as an 'ugly but loveable girl'. The second episode of 'Dream High' broadcasted on the 4th, shows Pil-sook (IU) taking off the mask and showing herself after the audition, wearing a sushi mask.

Pil-sook was scolded to take off the mask right away by the teacher's in the audition but they all melted down once they heard her beautiful voice.

Even after singing she wouldn't take off the mask but finally she apologized and took it off. Inside the sushi mask was a figure of a fat girl, wearing big broad-rimmed glasses, looking well enough to be called mud.

At the words, "You seem to like her much", foundation director Jung Ha-myung (Bae Yong-joon) nodded his head and left the decision making to Kirin art school art director Si Bum-soo who revealed his bias towards appearance.

The scene to follow was that of Pil-sook coming out of the audition and shouting with joy. Having passed the audition, Pil-sook took out a picture of Kim Hyun-joong and said "Oppa, I made it". And started jumping up and down with joy. This is the part that seemed lovely and cute.

Jung Ha-myung showed his expectations for Pil-sook, as he said "She's going to become very pretty".

Pil-sook falling in love with dancer Jason (Wooyoung) is also drawing high expectations from viewers as the future 'Woo-U couple'.

"'Dream high' IU, "I will become very pretty". Ugly but loveable"
by HanCinema is licensed under a Creative Commons Attribution-Share Alike 3.0 Unported License.
Based on a work from this source