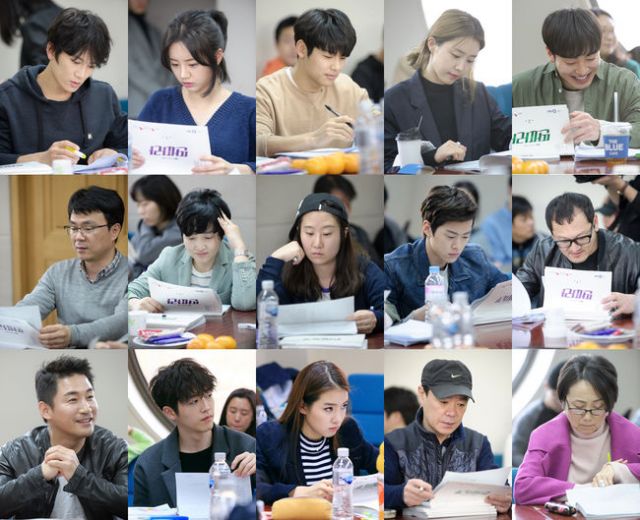 All of "Entertainers" production team and cast met together to hold their first script reading session in the middle of March in Ilsan production center.

Kim Yeongseop, head of SBS' drama department said, "I can tell it will be a success when meeting the director, writers and all the cast, whose potentials are so strong. I hope you all believe in the power of positive mind and go for it". Lee Yong Suk Executive Producer, who is a chief producer, said, "I'll help hard with anything big and small".

Ji Sung, who had already been reading his script for an hour to study his character Sin Seok-ho before the session began, said, "I'll work hard with a beginner's mindset" in a loud energetic voice. Hyeri, who will play Jeong Green, also made a modest comment saying, "Please teach me a lot. I'll count on you".

Chae Jung-an said, "I want to play well having so much fun". And other actors including Gong Myung, Jeon No-min, Jung Man-sik, Heo Joon-seok, Kim Ho-chang, Lee Tae-sun, and Yoo Ji-sang also spoke about their mindset and emotions towards the start of the drama production.

Writer Yoo Yeong-ah appreciated the team with the heartfelt words, "I sincerely thank you everybody for participating in the drama". Directors Hong Seong-chang and Lee Gwang-yeong said, "The virtue of our drama is humanism. Let's do our best to be able to deliver the sentiment and emotions of our drama to the viewers".

"Entertainers" depicts the success story by the bold and reckless manager of a newly established entertainment company, Sin Seok-ho and the newbie band, Ddanddara. The drama will premiere on April 20th once "Please Come Back, Mister" has finished.

"'Entertainers' starring Ji Sung and Hyeri holds first script reading session sharing so much excitement and talent"
by HanCinema is licensed under a Creative Commons Attribution-Share Alike 3.0 Unported License.
Based on a work from this source