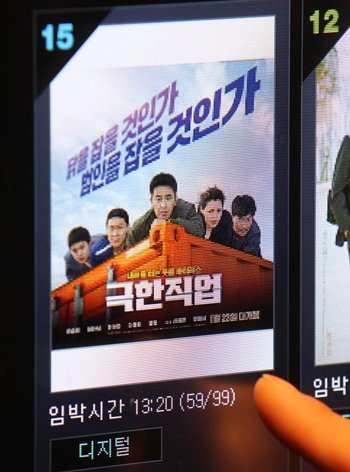 According to the Korean Film Council, the film sold some 14.54 million tickets as of Monday.

The comedy attracted more than 5 million viewers in the first 10 days after its release on Jan. 23, and crossed the 10-million-viewer mark in about two weeks.

It became the most successful Korean comedy and the second-most-viewed film of all time in any genre.

It now remains to be seen whether it can break the record held by the 2014 period filck "The Admiral: Roaring Currents", which has been Korea's top-grossing film ever with 17.61 million viewers.

"Extreme Job" revolves around a team of narcotics detectives who go undercover in a fried chicken restaurant to take down an organized drug ring.

"'Extreme Job' Continues Successful Run at Box Office"
by HanCinema is licensed under a Creative Commons Attribution-Share Alike 3.0 Unported License.
Based on a work from this source