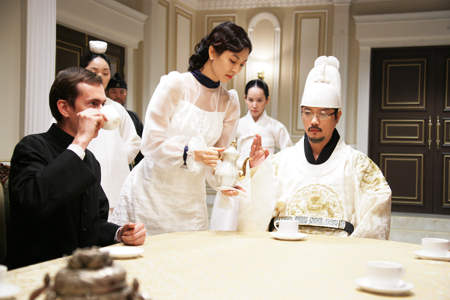 A scene from "Gabi" / Courtesy of Cine De Epi

The wild popularity of coffee has spilled over to the silver screen, and that Western influence has created an unconventional period piece set in the Joseon Kingdom (1392-1897).

"Gabi", the newest film by Jang Yoon-hyeon ("Hwang Jin Yi", "Tell Me Something" and "The Contact", among others), has solid star-studded insurance but its first and foremost attraction remains its intriguing story. It mixes one of the most turbulent times in Korean history with the fictional tale of the beverage's introduction to the country.

Gabi is the antiquated local-language term for coffee, coined upon its introduction during the same period.

It may be a fantastical historical fiction with plenty of romance and betrayal but the team behind the film stressed that they put painstaking efforts to meet historical accuracy at the promotional press conference last week. Studies preceded its shooting to recreate the decor and the costumes _ and even the most common practice of coffee making at the time.

Thanks to these details, moviegoers can expect nonstop visual pleasures in every scene.

"There are interesting juxtapositions between the East and the West", said Jang, stressing the work's difference from other period pieces that exclude the world outside the peninsula. "In a Western-styled space, there are Eastern faces, and in an Eastern-styled space, there are Western faces. We built more than 10 sets from scratch. We had 80-something different costumes".

On the set are four actors in their prime, who brought authenticity to the screen in their own ways.

"I read history books to get a better understanding of Gojong", said Park. "I wanted to break the preconceptions about (the king)... While staying at the Russian consulate, he thought only about his country, but most of us mistake him as a coward who fled just to save his life".

His white royal garb, mourning his queen, is one of the most striking costumes that have been revealed thus far.

Kim, returning to the silver screen after 14 years, said she learned how to brew correctly from Jang and Joom, both aficionados of the drink. Jang's regular spot, Cafe de Fazenda in Seobinggo-dong in central Seoul, was the chief consultancy. In the film, Kim's Tanya is also taught the technique of coffee making by Joo's Ilyich.

"I have personally brewed coffee for myself every morning for the past 10 years", said Joo.

Yu seemed attached to the many audacious hairstyles that came with her role, but she was especially vocal about the traditional Japanese kimono.

"As soon as I wore it, it was a foreign feeling", she said. "I became Sadako in it and it was a perfect way to convey her ambition".

"'Gabi': East-meets-West thriller on Joseon Kingdom's first coffee "
by HanCinema is licensed under a Creative Commons Attribution-Share Alike 3.0 Unported License.
Based on a work from this source