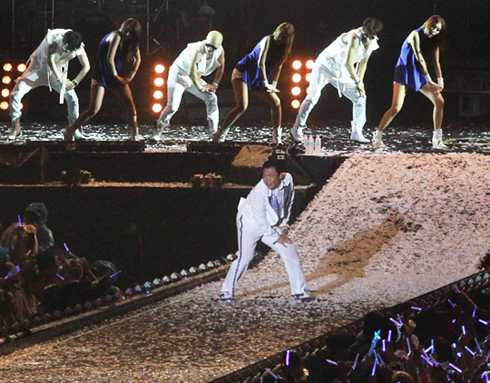 Psy held a solo concert at Jamsil Olympic Stadium in Seoul on Saturday, drawing over 30,000 spectators. "Gangnam Style", the dance-pop title track of his sixth album, has topped the nation's major music charts for almost a month since its release in July.

Psy performs a concert at Jamsil Olympic Stadium in Seoul on Saturday.

Given that the nation's music industry is dominated by idol bands, the popularity of this seasoned singer who debuted 12 years ago is of particular note. One local critic attributed his longevity and success to the combination of his catchy songs and the way Psy has positioned himself as representing a key sub-culture.

On the surface, his latest song "does not appear sophisticated. But its rendering and arrangement are very sophisticated, appealing to the general public", said music critic Cha Woo-jin.