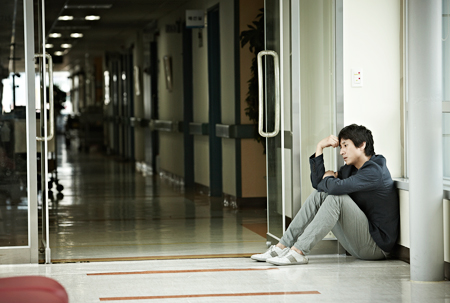 Lee Sun-kyun in a scene from "Helpless"

Regardless of a director's competence, poorly adapted screenplays can kill a movie.

"Helpless" (local title: "Hwacha"), Byeon Yeong-joo's newest work in seven years, epitomizes this unfortunate truth, and she only has herself to blame because she also wrote it.

Best known for her acclaimed documentary triptych on comfort women, or the Korean sex slaves during the World War II ("The Murmuring",1995, "Habitual Sadness", 1997 and "My Own Breathing", 1999), Byeon now presents a thriller feature based on best-seller 1992 novel "Kasha" by Japanese novelist Miyuki Miyabe. (The title refers to a train to hell from the country's folklore. Passengers can only board but not get off.)

Perhaps due to the less than ideal working conditions, including a low budget, Byeon seems to have fallen into the common trap of "one-man" shows (or in this case, one-woman) where the single control tower fails to keep the necessary distance from the story and so cannot explain it in a coherent fashion.

She may be able to understand the narrative - audiences familiar with the novel may overlook her mistakes and be glad to see some scenes come to life in a cinema - but otherwise, her work is too cluttered to make the characters and the work believable.

In "Helpless", Moon-ho (Lee Sun-kyun) and cousin Jong-geun (Jo Sung-ha), a retired violent crimes detective, are searching for the former's fiancee Sun-young (Kim Min-hee) after she disappears without a word at a highway rest area. During their pursuit, they realize she is not who she claimed to be, with a stolen identity and even murders in her past.

Byeon's screenplay succeeds in following Miyabe's narrative from the beginning to the end, albeit loosely. But the director/screenwriter avoids character development for all three, and this is the film's ultimate downfall.

Veterinarian Moon-ho screams, wails, destroys a car and even accidentally kills a customer's pet, suffering from stress that pushes him over the edge. But his torment is spewed out as sporadic outbursts - without any palpable difference between them.

He obsesses over the fiancee on a regular and consistent basis rather than progressively sinking into a psychological swamp. Even as the puzzle of her blood-soaked background becomes more complete, he shows no change in sentiment. He is just plain angry all the time.

It is just as unclear and unconvincing that they are in love in the first place. Byeon may succeed in enhancing the aura of Min-hee's mystery by letting her face be so inscrutable. After almost two hours, it only becomes a one-dimensional facade of inexpressiveness. If she is ruthless, an empty soul, how did he fall in love with her? There is no explanation.

Jo's financially deprived former detective Jong-geun is the most relatable character on screen. He, unlike the other two, is a real person who has different emotions, alternating between comedic and serious.

Treating Jong-geun's family members like props makes his plight less credible, though. Does the wife ever complain? Is the child embarrassed to have a jobless father, to live in poverty?

Miyabe's original work was credited for its honest portrayals of modern social problems. The female protagonist becomes a monster, killing for insurance money and new identities, due to her surroundings: organized crime, prostitution, and piling debt.

But Byeon's camera instead dwells too much on the investigative adventure of the two cousins for most of the film, which makes the whole work spotty. The inevitable suicide ending was the icing on this hodgepodge cake.

All three actors, who have built solid careers thus far, are the real victims of this outrageous work.

The film's fast pacing will feel like a fast train, but moviegoers had better stay off it from the first place.

Currently in theaters. Runs for 117 minutes. Rated 15 and over. Distributed by CJ E&M.

One star out of four.

"'Helpless': director's oversight drags film down"
by HanCinema is licensed under a Creative Commons Attribution-Share Alike 3.0 Unported License.
Based on a work from this source