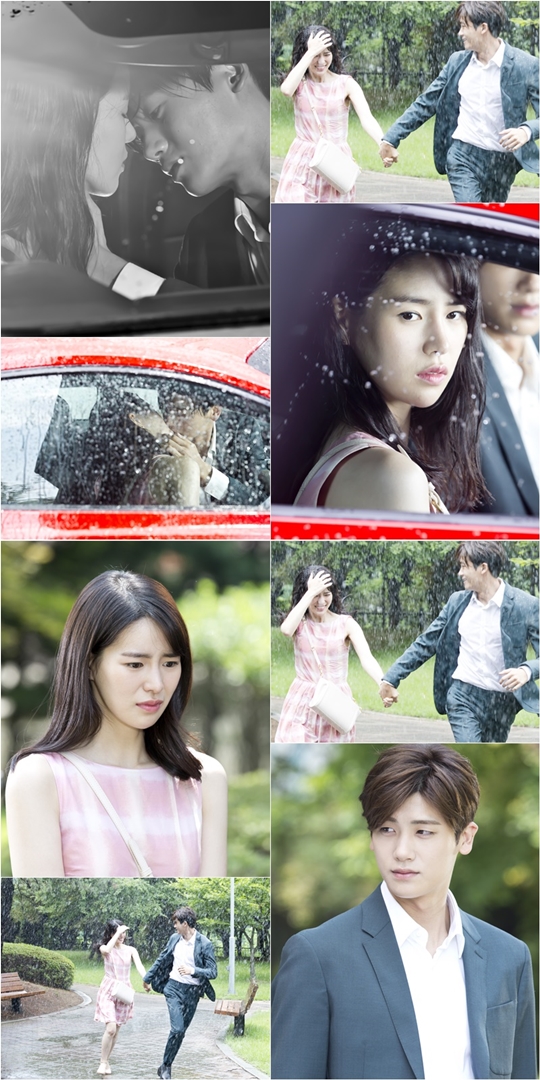 Still images of the rain kiss scene of the July 7th episode of "High Society" have been unveiled.

In this episode, Chang-soo (Park Hyung-sik) and Ji-yi (Lim Ji-yeon) announced break-up to each other as the two could not overcome the distance derived from their different social classes. After this episode, the picturesque visual images and the youthful fresh appeals of the actor and the actress have been garnering much reaction.

Although the two made the tearful decision to break up, they cancelled the decision after all, blaming the lousy weather. People say the scene was a true reflection of Chang-soo-Ji-yi couple's characteristics. The two confirmed each other's love exchanging sweet kisses. There's much anticipation on how their romance will move forward through the next episodes after the kiss scene.

It is known that producer Choi Yeong-hoon paid special attention on the aquatic kiss scene full of fresh and youthful images. They chose a location where there was no interference of passerby so the two could concentrate on expressing the emotions of their youthful yet deep love.

It took three hours to complete the scene including the rehearsal time without any mistakes. Park Hyung-sik and Lim Ji-yeon were getting soaked with a truck load of water, while they absolutely concentrated on the scene to produce such beautiful scenes.

Thanks to all these invigorating efforts by the actors and the production team, the ninth and tenth episodes of "High Society" ranked top for the viewership rating among Monday & Tuesday dramas. The second half of the drama will focus on delivering engaging stories as to how Yoon-ha (UEE) will cope with the shocking situation at the finding of Joon-gi (Sung Joon)'s intentional rogue approach and which option Chang-soo will choose under the given situation in terms of his relationship with Ji-yi.

"'High Society' has unveiled the still images of Park Hyung-sik and Lim Ji-yeon's rain kiss scene"
by HanCinema is licensed under a Creative Commons Attribution-Share Alike 3.0 Unported License.
Based on a work from this source