'Horror Flicks in the Summer', The Formula Is Broken, The Genre Is Expanding 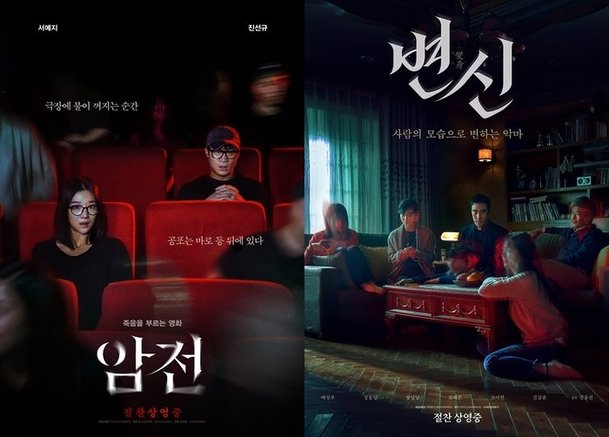 First in place at the Box Office on the 21st was Dwayne Johnson and Jason Statham's "Hobbs & Shaw". Next came Cho Jung-seok and Yoona's comedy film "Exit - Movie", 3rd was "The Battle: Roar to Victory", 4th was "The Secret Life of Pets 2" and 5th was "Hello Tyrano: Together Forever".

The formula that horror flicks are for summers is broken. Traditional horror is gone, and only films and dramas with the borrowed feeling of horror remain. Even the audience doesn't seem to seek out horror films anymore.

"Warning: Do Not Play" is about a rookie film producer named Mi-jeong (Seo Ye-ji) who uncovers the truth about a horror film that was banned from being released. It is the only traditional horror film of the year, but it stopped at 30,628 views with an accumulation of 99,321 until the 21st.

"Metamorphosis" is the creepy story of a devil that transforms itself to human form, living among a family. It's closer to being a thriller based on the occult. "The Divine Fury", which came out on the 31st of July, is an occult genre in which an exorcist chases demons. Unlike conventional horror films that have dealt with a bizarre phenomenon such as ghosts and demons, horror movies are transforming into other genres.

The same flow can be seen in dramas. Scary dramas like "Hometown Legends" don't come out anymore. Instead, creepy dramas with a friendly ghost or demon like the tvN drama "Hotel Del Luna" and "When the Devil Calls Your Name" have been appearing. Cable television has been airing dramas with scary and creepy content every summer, like 2015 tvN drama "Oh My Ghostess" and 2016 tvN drama "Bring It On, Ghost", as well as the 2017 OCN drama "Save Me".

The timing of horror movies is also changing with the trend of the times. The occult horror movie "Svaha: The Sixth Finger" opened in February this year, the horror thriller "Watching" in April and the classic horror film "0.0MHz" in May. Horror films have become more popular in off-season theaters. The movie "Gonjiam: Haunted Asylum" was also an unusual success as a low-budget horror film, opening in March last year and attracting 2.6 million viewers.

"'Horror Flicks in the Summer', The Formula Is Broken, The Genre Is Expanding"
by HanCinema is licensed under a Creative Commons Attribution-Share Alike 3.0 Unported License.
Based on a work from this source