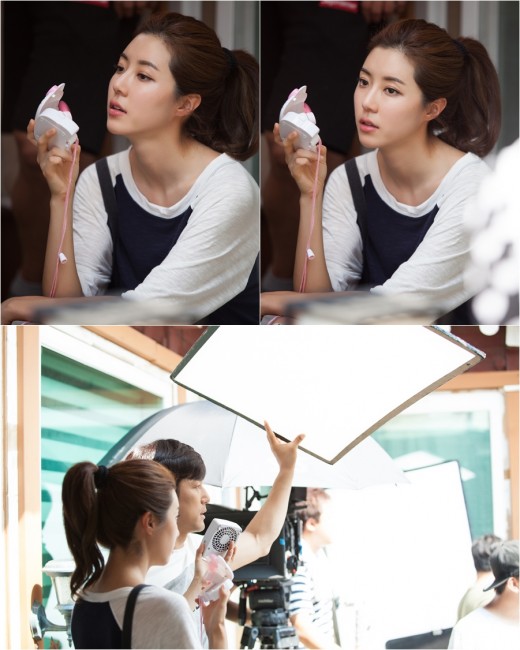 Actress Park Han-byul's way to beat the hot summer weather has been revealed.

Park Han-byul will play a pure-hearted girl, Kang Seol-li, who falls in one-sided love with Choi Jin-eon (Ji Jin-hee), a senior student of school of pharmacy, in SBS' new weekend drama, "I Have a Lover".

Her character is someone who has the strong surviving skills to make living by working any part time jobs with high hourly rate and sometimes eating overdue sandwich and cake for her lunch.

On August 11th, the production company has revealed some of her snaps taken on the set. Park Han-byul tied her hair in a tight pony tail and cooling the air with a mini portable fan. Her long neck and collarbones won't let your eyes turn away.

In another photo, she is standing with Ji Jin-hee next to each other. While Ji Jin-hee is holding a light reflector, Park Han-byul is trying to cool down the air with her mini fan for him.

It is highly anticipated how Park Han-byul transform for her role Kang Seol-li, who loves someone with her innocent and passionate heart.

"'I Have a Lover' actress Park Han-byul looks lively and cheerful on the set despite scorching weather"
by HanCinema is licensed under a Creative Commons Attribution-Share Alike 3.0 Unported License.
Based on a work from this source