'Live from Seoul, It's Saturday Night!' 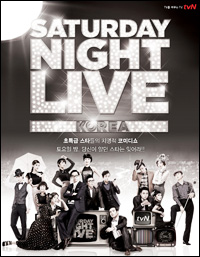 Legendary American sketch comedy and variety show Saturday Night Live (SNL) has entertained the world with its pointed political satire and priceless skits for the past 37 years.

Channel tvN is taking on the formidable task of producing a Korean version. Famed director and writer Jang Jin, who will be directing the program, called it a dream come true at a press conference in Cheongdam-dong, southern Seoul, Thursday.

But how the show full of acid political satire and sexual jokes will hit it off with the Korean audience remains to be seen.

"Live from New York, Its' Saturday Night!" Watching SNL, though not so well-known in Korea, is part of the American tradition. Every episode usually features a guest host, usually a celebrity, with a permanent SNL cast to perform live acts. In the opening sketch, various figures have made cameo appearances including President Barack Obama and Secretary of State Hillary Clinton.

The Korean version will follow the same format of a host and 16 cast members and will present 10 skits each Saturday.

Last week, an opposition lawmaker shot a tear-gas canister into the main hall at the National Assembly as the governing party railroaded through a free trade agreement with the United States, prompting outbursts of criticism.

"Before, any political satire could be directed at the ruling party. But nowadays there are a lot things to pick on in the opposition party as well", he said.

Yet ridiculing politics is walking on thin ice and has been a realm for journalism. A podcast radio show "I'm a Weasel" has gained popularity by criticizing the current government. Recently Rep. Kang Yong-seok, who almost lost his Assembly seat over inappropriate remarks to female collegians aspiring to become announcers, filed a libel suit Thursday against comedian Choi Hyo-jong, for offending lawmakers during a show.

Jang said that he plans to be fearless and work on leveling the satire as the show goes on.

The low recognition of SNL in Korea and the daunting role of the main guest host led many to decline the offer. Actor Kim Joo-hyuk, who has a calm and serious mask, will host the first episode. At the press conference Jang thanked Kim for taking on the challenge to make SNL Korea shine.

The producers of the show are well aware of these issues in importing the all-American show, which is why the show only has eight episodes planned. Jang said he hopes to make this a long-running show. He hopes the first season will attract more celebrities as hosts so it can continue. If Ahn Young-mi, the only female comedian for SNL Korea, can pull off either Rep. Na Kyung-won or Rep. Park Geun-hye like Tina Fey impersonates Sarah Palin it would be priceless.

"'Live from Seoul, It's Saturday Night!'"
by HanCinema is licensed under a Creative Commons Attribution-Share Alike 3.0 Unported License.
Based on a work from this source