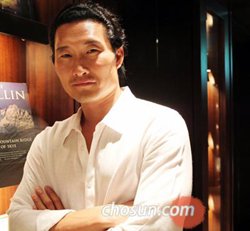 Star of the hit TV series "Lost" on ABC, Daniel Dae Kim visited Korea as a cultural ambassador for the U.S. Pavilion at the Yeosu Expo. Even though he claims to speak Korean poorly, Kim greeted his fans with a fluent accent, unlike the character he portrayed in the TV series that ran from 2004 to 2010.

Kim was born in the southern port city of Busan and immigrated to the U.S. at the age of two. He debuted in Hollywood playing a bit part in the 1991 movie "American Shaolin" and went on to play minor roles in other movies and TV dramas.

He got his big break playing the husband of Korean actress Kim Yunjin in "Lost" for six seasons. He is now playing one of the main characters in the remake of the hit 1960s and 70s TV show "Hawaii Five-0" on CBS.

Kim recalled that he was able to perform on the global stage for the first time in his 20-year acting career due to "Lost". "It's also because of 'Lost' that I got a chance to star in 'Hawaii Five-0'," he added.

Kim is considered one of the most successful Korean-American actors in the U.S. But he said it was tough for him in the beginning.

He said most writers did not have Asian actors in mind when they penned scripts, so it was tough to pass auditions. When they were looking to fill Asian parts, it was still grueling because he had to compete with a multitude of Asian and Asian-American actors.

He said this heavy competition and lack of demand explains the scarcity of lead roles for Korean-American actors, with Steven Yeun in "Walking Dead" and Aaron Yoo in "Disturbia" serving as the exceptions rather than the rule.

"There are no borders when it comes to talent, so Korean filmmakers will create completely new movies that show a Korean perspective on things", Kim said, referring to Park Chan-wook directing the upcoming Hollywood film "Stoker", and Bong Joon-ho directing "Snowpiercer".

He said he enjoyed watching the Korean TV dramas "Winter Sonata" and "My Name is Kim Sam-soon", while his favorite Korean movie is Park's revenge trilogy, including "Old Boy".

"'Lost' Star Daniel Dae Kim Meets Fans in Yeosu"
by HanCinema is licensed under a Creative Commons Attribution-Share Alike 3.0 Unported License.
Based on a work from this source