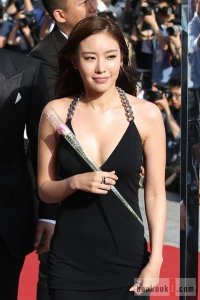 Actress Kim Ah-joong will star in the music video of singer Yoo-mi, who became famous for 'Love is Always Thirsty". The title song of her third album 'Melody & Memory' is 'Words I Can't Say Because I'm a Woman'.

Yoo-mi was Kim Ah-joong's vocal teacher while she was filming "200 Pounds Beauty". Kim Ah-joong received an award for the movie, and she willingly accepted to star in the music video with no pay and proved their friendship.

The music video was filmed on the 16th and 17th, and it will be released in the end of May along with her album.

"'Loyal' Kim Ah-joong, Starring in music video of vocal teacher "Yoo-mi' with no guarantee"
by HanCinema is licensed under a Creative Commons Attribution-Share Alike 3.0 Unported License.
Based on a work from this source