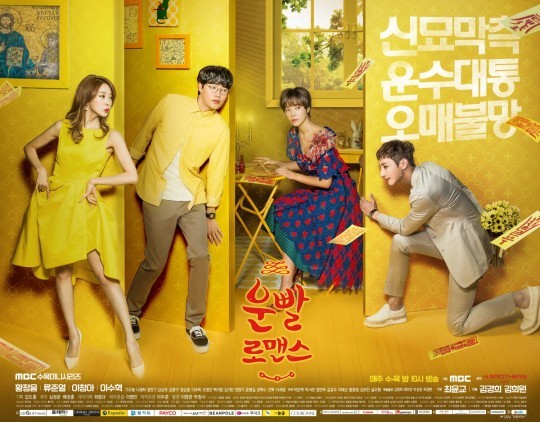 As the viewership rating of MBC's new Wednesday/Thursday drama, "Lucky Romance" has dropped, the competition among groundwave TV dramas has turned more intense.

This number is 1.6% down compared to 10.3% of its previous episode. Although the number has dropped, "Lucky Romance" managed to keep its first place.

The difference between "Lucky Romance" and SBS "Entertainers" is only 0.1%. "Entertainers" went up by 1.1% to record 8.6% this day. Even the drama ranked lowest during the same airtime, "Master - God of Noodles" also recorded 8.0%. Based on these numbers, it is likely that the ranks can be overturned any time.

While "Lucky Romance" has been anticipated to lead the Wed-Thu dramas recording the two digit number with the first episode, the viewership competition is becoming more interesting as it all of sudden is stalling.

"'Lucky Romance' viewership rating drops, beats 'Entertainers' by 0.1%"
by HanCinema is licensed under a Creative Commons Attribution-Share Alike 3.0 Unported License.
Based on a work from this source