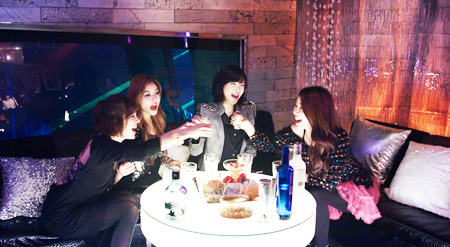 The little black dress is a coveted fashion item that befits any occasion, from dates to funerals. A new chick flick named after the garment makes a point of saying this - amid 107 minutes of catfights and whatnot - only to become a fashion victim of sorts. Was it really necessary to kill a supporting character for a funeral scene to prove it?

Like the versatile dress that inspired its title, the genre-hopping "My Black Mini Dress" tries to kill several birds with one stone. It offers snippets of high fashion and dabbles with unemployment woes, but neither young audiences brought up on "Sex and the City" and wanting to live vicariously through the four pretty actresses, nor the "880,000-won Generation" seeking comfort in a mellow coming-of-age story, will be satisfied.

The movie opens like a fashion magazine spread as the four twiggy actresses strut through the streets in spangled micro-miniskirts and platform booties. It's passable at this point, as a woman's version of films like "The Social Network" that dish out fantasies of how an Ivy League undergraduate education entails partying with supermodel-esque women willing to take off their bra at anytime.

Yet the film tries to feign realism as if to say, "hey, we know what young women are really going through".

Life after graduation isn't so glamorous, as the quartet can get only so far with having one of their boyfriends pay for their extravagant whims. When the sun rises after a night of designer lipstick and champagne, they wake up to the reality of runny mascara, disenchanting one-night stands and, most importantly, an uninspiring career (or complete lack thereof).

Things take a turn when the hedonistic playgirl Hye-ji debuts as an actress and embarks on what seems to be a fast track to success, and their friendship is put to the test.

The viewers watch the jealousy-fueled catfight unravel from the point of view of Yu-min, who is supposedly the most ordinary among the group - she isn't as pretty as Hye-ji, as wealthy as Min-heui or as intellectual as Su-jin. She lands a job as an assistant to a famous TV scriptwriter, humorously played by the musical star Jeon Soo-kyung. But Yu-min's job is more along the lines of "The Devil Wears Prada" as she spends more time babysitting the boss' twin boys than researching.

"My Black Mini Dress" stops short of women whining about having to stand for a long time in high heels, though Park delivers on some of the more significant tragicomic moments, alongside Ko Chang-seok, who makes yet another cameo as a cranky filmmaker.

The movie fails to speak out to angst-ridden Korean youths who, despite having qualified college degrees, are unable to secure stable jobs - our heroines can easily study abroad or conveniently move out of their parents' posh apartment for a taste of what it's like to live in a gritty neighborhood.

Yet the story's inherent problems do not stem from portraying upper-middle class characters. Rather, director Huh In-moo overlooks what could have easily been potentially rich character developments and does not delve fully into the dynamics of the friendships among the four.

Yoon is somewhat convincing in her first big screen role since the forgettable "The Legend of Seven Cutter". But when she sighs how "everything is so anticlimactic in your 20s", the existential crisis feels rather cliched and out-of-style.

One-and-a-half stars out of four.