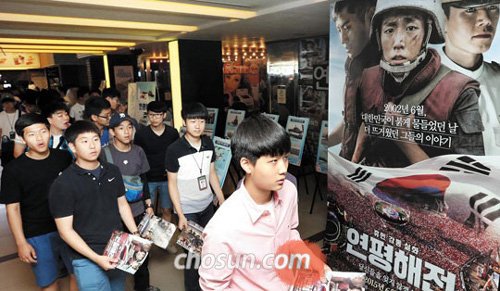 The movie "Northern Limit Line", which depicts a bloody naval skirmish with North Korea 13 years ago, has drawn more than 1 million viewers in the first four days of its release.

A spokesman for distributors NEW said the feat was particularly striking since this is a slow season in the movie industry.

The spokesman added "Northern Limit Line" is pulling crowds at the same rate as previous box office hits "Masquerade" (2012) and "Ode to My Father" (2014), both of which attracted more than 10 million viewers.

Many people are going to see the movie in groups. CGV movie theaters said the chain is getting inquiries about group reservations for parties ranging in size from 20 to 80".

"I was surprised to see the move raise W30 million in funding from supporters just a few days after we launched a crowd funding effort to produce it. And now I'm surprised again", said director Kim Hak-soon (US$1=W1,120).

"'Northern Limit Line' Draws More Than 1 Million Viewers"
by HanCinema is licensed under a Creative Commons Attribution-Share Alike 3.0 Unported License.
Based on a work from this source