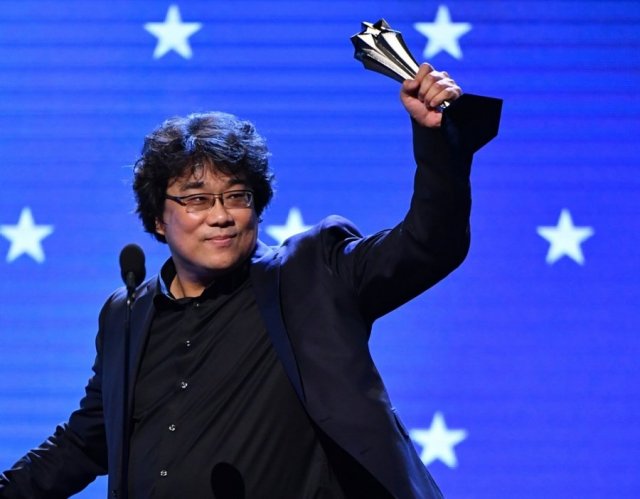 Director Bong Joon-ho poses with his trophy at the Critics' Choice Awards in California on Sunday. /AP-Yonhap

The Academy of Motion Picture Arts and Sciences on Monday announced contenders for this year's Academy Awards. Bong will compete with heavyweights Martin Scorsese for "The Irishman", Todd Phillips for "Joker", Sam Mendes for "1917", and Quentin Tarantino for "Once Upon a Time in Hollywood".

The nominations are a rare leap for a non-anglophone picture that was originally shortlisted only for best foreign film.

Another Korean director, Yi Seung-Jun, also earned a nomination for best short documentary for "In the Absence", which deals with the April 2014 ferry disaster that took the lives of over 300 people, mostly teenagers, off the southwest coast of Korea.

"I definitely did not expect this award, so I did not prepare a speech", Bong said through a translator. "So many unexpected things happen in life, just like Parasite. I'm sure those of you that have seen it didn't expect what was going to happen".

He added, "What makes me happier is just being nominated with the fellow amazing other directors".