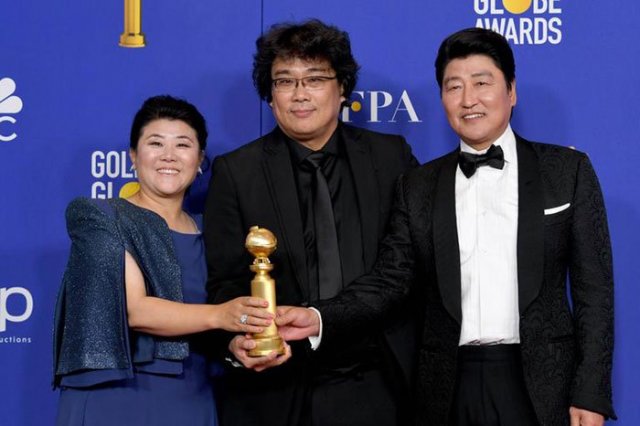 It is the first time that a Korean film has won the honor bestowed by the Hollywood Foreign Press Association.

"Once you overcome the one-inch-tall barrier of subtitles, you will be introduced to so many more amazing films", Bong said through an interpreter when accepting the trophy. "Just being nominated along with fellow amazing international filmmakers was a huge honor. I think we use only one language: the cinema".

"Parasite" won the top honor at the Cannes Film Festival last year and many other awards at home and abroad. Since its U.S. release in October last year, it has garnered global praise, becoming one of the most successful Korean films. It has also been shortlisted for best foreign film at the Academy Awards in early February.

The film revolves around two families whose lives become intertwined when the son from a poor family scams his way into a tutoring job with a wealthy one.

"'Parasite' Takes Golden Globe as Best Foreign Film"
by HanCinema is licensed under a Creative Commons Attribution-Share Alike 3.0 Unported License.
Based on a work from this source