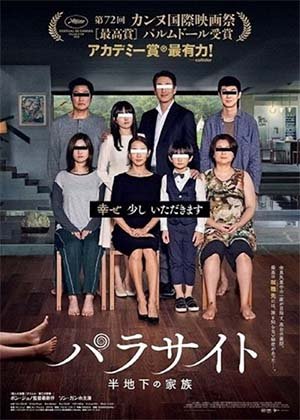 According to Japanese box-office tracker Kogyo Tsushinsha, the black comedy attracted 191,429 viewers over the weekend to lead the box office in the island country.

The film was ranked fifth when it was released there on Jan. 10. After it won four Oscars -- best picture, best director, best original screenplay and best international feature film -- at this year's Academy Awards last week, it rose to the top, edging out Sam Mendes' war epic "1917".

It is the first time that a Korean movie has topped the Japanese box office since the melodrama "A Moment to Remember" starring Jung Woo-sung and Son Ye-jin in 2005.

Japan was no exception in seeing interest explode in the film after its success at the Oscars, with viewer numbers soaring about 500 percent from a week ago.

"'Parasite' Tops Box Office in Japan After Oscars Success"
by HanCinema is licensed under a Creative Commons Attribution-Share Alike 3.0 Unported License.
Based on a work from this source