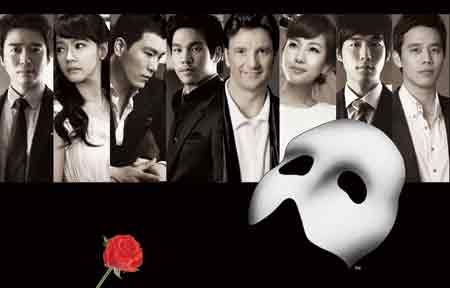 After a successful year-long run, one of the world's most beloved musicals, Andrew Lloyd Webber's "The Phantom of the Opera", will come to an end on Sept. 11. To celebrate its grand finale, the musical will hold a gala performance, "The Music of the Night" from Sept. 17-19 at the Charlotte Theater in Jamsil, southern Seoul.

The concert will bring world-renowned musical actor Brad Little who performed the role of the Phantom more than 2,300 times on Broadway and seven other Korean vocal stars including Yoon Young-seok, Yang Jun-mo and Hong Kwang-ho together.

The concert will present the musical's most popular scenes as well as other ear-catching numbers such as "popera" (operatic pop) and K-pop songs to entertain the audience.

They will also perform famous songs from other hit musicals such as "Jekyll and Hyde", "Miss Saigon", "Man of La Mancha", "My Fair Lady", and "Jesus Christ Superstar".

Other numbers will include Josh Groban's "You're Still You" and Il Divo's Kim Jae-joong.

There isn't much doubt that Little will be the most anticipated by the audience as he has a wide fan base in Korea. Little performed a perfect portrayal of the Phantom in the show in 2005 and in "Jekyll and Hyde" last year in Korea.

The American actor will also sing musical numbers from Lloyd Webber's "Love Never Dies", the sequel to "The Phantom of the Opera", which premiered in the West End this year, for the first time for his Korean fans.

First staged in Korea in 2001, "The Phantom of the Opera", sparked a huge musical boom, dividing the local scene into two eras ― pre- and post-Phantom.

Seol & Company brought the musical back last year in an attempt to re-create the magical excitement of the ailing industry. The company said that it will have attracted some 330,000 theatergoers by Sept. 11.

"It might be hard to reach our goal of 400,000 spectators due to the economic crisis in the performing arts market. But we are sure that 'Phantom' will be the top grossing musical of the year. We are proud of it", Shin Yu-mi, official of the company, said.

"'Phantom' heroes reunite for final gala concert"
by HanCinema is licensed under a Creative Commons Attribution-Share Alike 3.0 Unported License.
Based on a work from this source