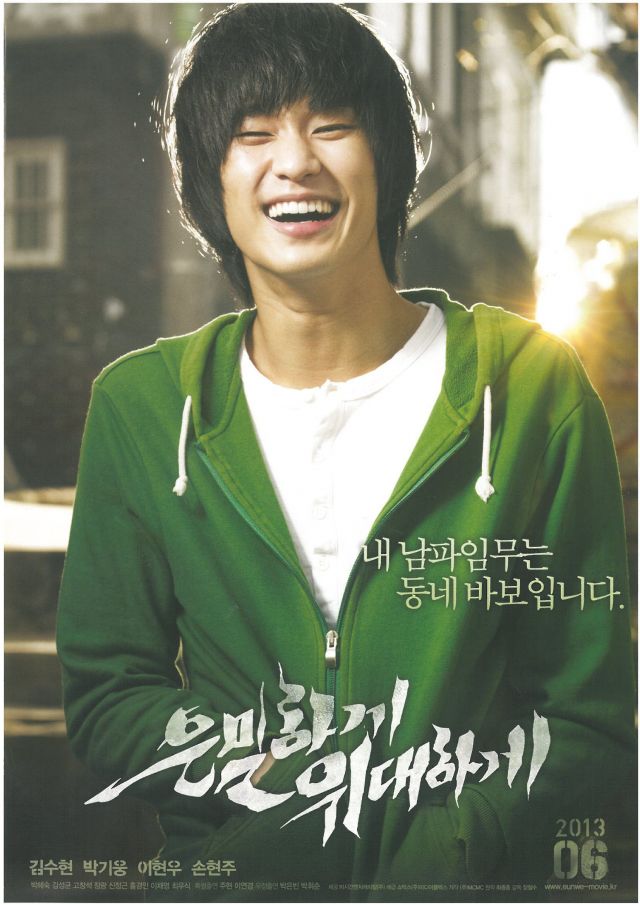 Director Jang Cheol-soo's "Secretly and Greatly" hit the 3-million mark in terms of cinema attendance on Sunday, just five days after it was released. The hit movie attracted 1 million moviegoers in 36 hours and 2 million in 72 hours as it continues to set a series of new records in the history of Korean cinema. It attracted a record number of daily spectators (919,000) on Thursday, saw the most tickets booked before its release, and reached the 1-million mark faster than any other Korean film to date.

The film is a light-hearted comedy revolving around three North Korean agents who disguise themselves, respectively, as a village idiot, a rock star and a high school student while they await their orders from Pyongyang. When their mission turns out to be an order to commit suicide, due to a sudden power shift in the North, none are best pleased.

The movie's huge popularity is being driven by teenagers, particularly girls, who have been eager to get their hands on tickets in advance. According to ticketing site Maxmovie, teenagers accounted for a mere 3 percent of viewers who pre-booked seats for movies that drew over 2 million cinemagoers. But the figure for "Secretly and Greatly" stands as high as 13 percent.

The site conducted a survey on 11,100 people in their 30s or older who had made reservations and asked them who they watched the movie with. Some 45 percent named their kids, while 16 percent said they booked the tickets on behalf of their children -- 97 percent of whom were daughters.

Movie pundits believe the flick has proven such a runaway hit among teenage audiences due in part to the lack of movies targeting such a young demographic in the last decade or so. Since the mid-1990s, only a small number of thrillers or horror movies were made for young people's consumption during the summer holidays, as studios and producers focused more on the spending power of people in their 20s and older.

A staffer with CJ E&M said, "These days, adolescents have scant time to go to the cinema. There is also much more competition for their attention from other cultural products, such as fast-moving online computer games. Old-fashioned teen flicks barely draw their interest any more".

Show Box, the movie's distributor, said it adjusted the content to ensure "Secretly and Greatly" got rated PG-15. "Viewers seem to be quite satisfied with the film, which is based on a popular Internet cartoon", it said.

Another factor is the use of young actors like Kim Soo-hyun, Lee Hyun-woo and Park Ki-woong. The same trend was observed in "A Werewolf Boy", which attracted many teenage spectators last year as it starred young heartthrob Song Joong-ki.

In contrast, the majority of recent hits in Korea have featured older performers in their 30s or 40s in a bid to capture a similarly-aged audience demographic, for example, Lee Byung-hun (Masquerade), Ryu Seung-ryong (Miracle in Cell No.7), Ha Jung-woo (The Berlin File) and Kim Yun-seok (The Thieves).

"Movies created with those in their 30s or over in mind don't appeal so much to teenagers. But 'Secretly and Greatly' targeted younger people from the get-go and thus gives them something to talk about", the Maxmovie staffer said.

"'Secretly and Greatly' Blazes Trail at Box Office by Tapping Teen Audience"
by HanCinema is licensed under a Creative Commons Attribution-Share Alike 3.0 Unported License.
Based on a work from this source