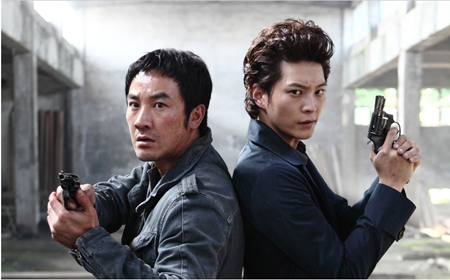 Uhm Tae-woong, left, and Joo Won appear in a scene from the cop movie "SIU". / Courtesy of Cinergy/Lotte Entertainment

From the "Two Cops" franchise and the "Public Enemy" series to most recently "The Apprehenders", Korean cinema seems to have seen its fair share of cop movies, but "SIU" is proving to be entertainment that sells well despite its flaws.

Having drawn over 550,000 viewers as of Tuesday since opening last week, the box office topper shows the grace of having a convincing script, allowing actors to shine and sticking close to the rules of a given genre, without being afraid to throw something else into the picture. The latter, however, proves to be a trap as well, as some grossly miscalculated narrative elements end up becoming cliches that weigh down the intrigue.

As expected of local cop films "SIU" features Eom as a foul-mouthed yet righteous policeman who is willing to chase evil criminals to the farthest end of the world. A colleague of his turns up dead while undercover and a special investigation unit is drawn up for the case. The team must fight against conspiring powers responsible for the crime, but all the while dealing with tension and mistrust that begin to build within the police force itself. Things aren't so easy when law enforcement turns out to be involved in the wrongdoing.

"SIU" is a classic film outing internal corruption, but director Hwang Byung-gook manages to turn what could have otherwise been a scatterbrained mess into a more or less coherent whole, while actors shine while getting down and dirty with business.

Here, the film opts for the conventional veteran and rookie combo over having an antagonistic "frienemy" duo with complex love-hate dynamics. Reliable actor Eom plays the no-joke veteran with an animalistic instinct for solving cases while newcomer Joo Won is a crime analyst with a fancy pedigree and hair-do. The film throws in the pretty Lee Tae-im as well as much-loved supporting actors Jung Jin-young and Sung Dong-il, making for a promising story with all the right ingredients.

The film starts out with thrilling action sequences that highlight the directorial skills Hwang polished through the OCN TV movie "Offline" as well as Eom's knack for stunts. Joo also makes a big entrance, hair intact and ready to woo viewers with his looks.

But "SIU" begins to lose momentum midway. The film tries to surprise the audience by bringing new twists to the case but the characters seem to have no intention of catching the hints. It seems to have branded cops as one-note beings that act before they think, and one cannot help feeling frustrated as Eom and company move forward only to regretfully reflect on their mistakes later. It is thus difficult to become completely absorbed in the criticism of societal wrongs and feel a cathartic release through characters that make big bold statements about justice.

What makes the cinematic experience more underwhelming is the character development - or lack thereof. Eom is pitifully cliched while Joo's special skills don't end up looking so special as it involves no more than staring pensively at photos. Lee, the only female cast member, has no role other than to provide breasts that Eom's character can drool over.

The film doesn't forget to depict the 2009 Yongsan fire tragedy - Hwang said he felt a responsibility as a director to include it. But viewers can reflect on social issues only when the story itself proves to be absorbing.

A Cinergy/Lotte Entertainment release, "SIU" is currently showing in theaters. Rated 15 and over, the film runs 110 minutes. Two stars out of four.

"'SIU' falls into traps of cop movie cliches"
by HanCinema is licensed under a Creative Commons Attribution-Share Alike 3.0 Unported License.
Based on a work from this source