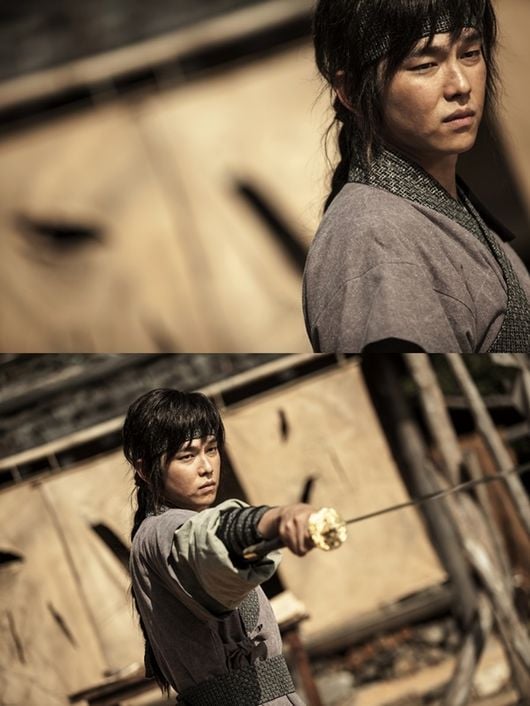 Following after the surprise preview trailer, still images of each of Six Flying Dragons in their first filming session has been being unveiled one after another.

Still images of Yoo Ah-in playing Lee Bang-won on August 31st, Shin Se-kyung playing Boon-yi on September 1st, Byun Yo-han playing Lee Bang-ji on September 2nd have been revealed. Each set of the images clearly introduced the characteristics of each role. And the overall dramatic ambience was prominent and heavy, which has raised the anticipation level on 'Six Flying Dragons'.

On September 4th, the production team of 'Six Flying Dragons' has revealed the still images of actor Yoon Kyun-sang, who plays warrior Moo-hyool. He brought the character to life in his own unique way.

Yoon Kyun-sang with long hair tied up is wearing warrior's clothes. He is holding up a large sword aimed at someone. Where the sword is aimed at is the place his eyes have reached. In the close-up shot, Yoon Kyun-sang's eyes look sharp and sad at the same time. Moo-hyool is the best swordsman of Joseon who later becomes Chief of Royal Guard. He is in the center of the founding of Joseon as one of the six dragons.

The character 'Moo-hyool' appeared in drama 'Deep-rooted Tree' four years ago. Actor Cho Jin-woong played the role at the time and was loved much and received sensational reaction. How Yoon Kyun-sang will play Moo-hyool in his younger age is drawing attention.

Meanwhile, 'Six Flying Dragons' is a historial fiction drama depicting success and ambitions by six figures who contributed to the foundation of Josen with Lee Banwon in the center of the story. Begining on October 5th, the drama will air every Monday & Tuesday.