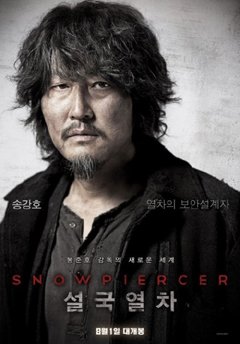 Bong Joon-ho's latest film "Snowpiercer" has attracted over three million spectators in just five days of its release -- the fastest pace ever set by a Korean movie.

According to the Korea Film Council on Monday, the movie was seen by 786,614 people on Sunday alone to keep a firm grip on the top spot at the local box office. As of Monday, it had sold a total of 3,297,568 tickets.

The much-anticipated sci-fi flick portrays a bloody class struggle on a train among the last few survivors of a new Ice Age.

"'Snowpiercer' Becomes Fastest Korean Movie to Draw 3 Million Viewers"
by HanCinema is licensed under a Creative Commons Attribution-Share Alike 3.0 Unported License.
Based on a work from this source