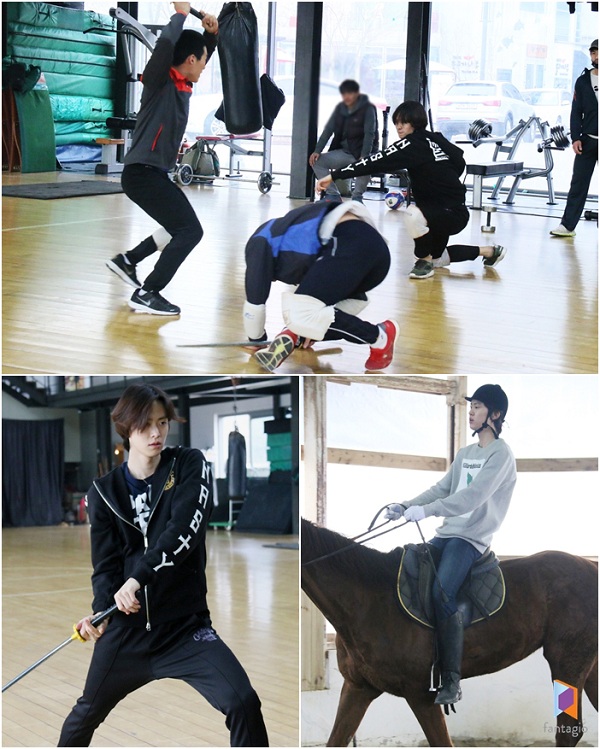 Actor Gong Myung, who will present the action acting as a guard warrior in "Splendid Politics", is in hard training. Some photos from his tough practices have been revealed.

"Splendid Politics" is MBC's special project produced to celebrate the broadcasting company's 54th anniversary. Actor group, "5urprise" member Gong Myung is currently in the hard training to practice action acting and horse riding for his role, Ja-gyeong in the drama.

As seen in the photos, Gong Myung is working hard to practice between action school and race track in order to be able to deliver the perfect action acting. He had started the training three months ago accommodating the classes in between his other schedules. His sincere attitude brings up the level of expectation for his role, Ja-gyeong.

A staff from action acting school said, "He has a great athletic sense propably because he did taekwondo when he was young. He is picking up everything so fast from the basic blade work to the intense action acting. Because he's committed to the learning, I believe he will be able to deliver the great action acting in the drama".

His character Ja-gyeong in "Splendid Politics", is a cynical character, who is full of spite as he has been living as a slave since he was little. However he is devoted to Prince Jeongmyeong (Lee Yeon-hee) only. He is also her closet best friend as well as a guard warrior keeping her safe.

Gong Myung debuted through "See You After School", 2013 and later appeared in movies including 'If You Were Me 6', "A Girl at My Door", and 'Futureless Things'. He achieved the stardom as a rising star on Chungmuro through the efforts.

"'Splendid Politics' actor Gong Myung, Princess Jeongmyeong's guard worrior is in hard training"
by HanCinema is licensed under a Creative Commons Attribution-Share Alike 3.0 Unported License.
Based on a work from this source