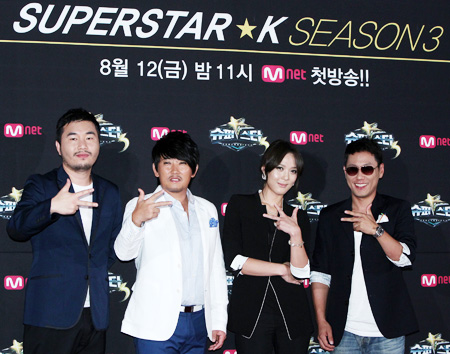 Mnet's "Superstar K" is the program that ignited the talent show boom in Korea. It has returned for a third season, with new judges, more contestants and improved rules embracing more diversity.

The first segment that aired Friday immediately became the talk of the town. Ten-year-old girl Son Ye-rim, Choi Yeong-tae who sang his own songs and Yeri Band passed the regional preliminary round in Busan under much attention. 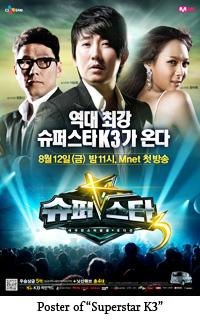 A problematic contestant also appeared. Choi A-ran, who sang Chae-yeon's "Shake", made a disturbance by throwing down a guideboard after failing in the preliminaries.

Viewer ratings also proved the popularity of the program. According to Mnet, the first episode of "Superstar K3" reached an average rating of 8.5 percent, even exceeding that of network channels.

Kim Yong-beom, the program's producer, said the quality of participants is higher than ever.

"In the first season, we tested the feasibility of audition programs in Korea and proved it a success during the second season last year", Kim said at a press conference last week. "There are so many talent shows now and it is a new challenge for us".
However, Kim said he does not consider other programs, including MBC's "Star Audition 2", as rivals. "We have different contestants and judges with different viewpoints", he said. "I am confident that 'Superstar K3' will bring diversity to the Korean music scene. We care more about their music than ratings".

Lee Seung-chul, a singer and a judge, said the participants are more serious about the audition now. "In the first season, some people came to audition just for the experience. In the second season, applicants started to bring musical instruments to better present their music. Now, not just singers but musicians applied for 'Superstar K3'," he said.

Yoon Jong-shin, another judge known for his eye in finding talent, said he already found several gems during the regional preliminaries. "Though they are rough now, they will improve as the program progresses", he added.

Hip-hop musician Yoon Mi-rae, also known as "T", joins the show as one of the three judges. The female judge position was taken by Lee Hyori in the first season and Uhm Jung-hwa in the second one. Yoon took part in the show as a guest judge then.
"I am focusing on finding people who have 'soul'," she said at the press conference. "The burden of being a judge is very big, but I will be true about my feelings in screening".

The number of applicants jumped to nearly 2 million, from 710,000 in the first season and 1.3 million in the second. The program is ready to brace the diversity of the record-high number of contestants.

The regional preliminaries have been expanded to overseas as well. In the second season, the talent show only offered overseas auditions in Los Angeles. For the third one, the producers and judges flew to New York, Beijing, Tokyo, Osaka and Sendai to hold auditions there. Not only overseas Koreans but foreigners came to audition for "Superstar K3".

During regional preliminaries, two out of three judges have to agree to pass a contestant. However, the new "Super Pass" system allows the judges to pass one participant per region without getting approvals from the other two.

While the two previous seasons focused on individual competition, "Superstar K3" added a group category. "We have more diverse genres of music now as indie bands, a cappella groups and even dance acts have applied for auditions", Kim said.

The program also introduced "Incubating School", which will assist dropouts to settle down in the music scene better.
"Some might do better if they are not competing in the audition onstage. However, this does not mean Mnet will manage them. We will just help them to find their music", Kim added.

"Superstar K3" is broadcast on Mnet at 11 p.m. every Friday. The winner of the third season will be announced on Nov. 11.

"'Superstar K3' returns with diverse music "
by HanCinema is licensed under a Creative Commons Attribution-Share Alike 3.0 Unported License.
Based on a work from this source