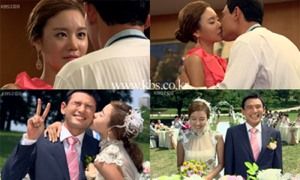 Dong-baek asked Ji-soo to end their contract marriage and divorce him, but Ji-soo said, crying, that she did not want a divorce. He told her, "I was dishonest. Now that I have really gotten to love you, divorce will not be an end but a new beginning. I want to divorce you so that I can start all over again with you. I want to be your real lover".

Dong-baek was subjected to criticism from his sister as well as his colleagues and Ji-soo's fans, who even attacked him so severely that he had to be hospitalized. But all these obstacles made Dong-baek and Ji-soo love each other more, and they enjoyed dating secretly and spending other time together.

In a press conference later to announce her divorce, Ji-soo confessed that she had married Dong-baek under a six-month contract but that she had really come to love him and would not divorce him. There, she proposed to him, and they kissed. And they had another wedding amid the blessings of relatives and friends to become a "real" couple.

The episode ended with Ji-soo and Dong-baek's narration saying, "The six months we first wished would pass in a flash has changed us all. It seems we have grown up a bit. Now we know where true happiness comes from".

Viewers expressed their impressions on the drama's web board, saying that they continually smiled while watching it and felt happy after each viewing. They said they were fortunate to watch such an entertaining drama.

Actor Baek Sung-hyun, who played Han Sang-cheol, Ji-soo's brother, also wrote his feeling about being part of the drama. He said, "I feel as if I will still live as Sang-cheol when I get up tomorrow morning, going to my sister Ji-soo's home. I feel proud of our drama because all the staff and casting members gave it all they have, and am honored to be a part of this heart-warming, happy drama".