'The Accidental Couple' in Matching Outfits 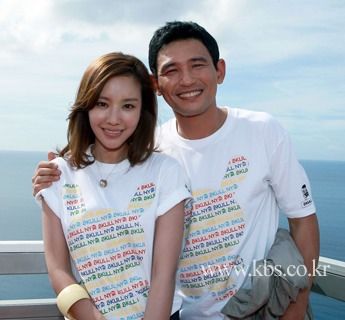 The new KBS2 drama "The Accidental Couple" has attracted increasing attention by releasing photos of its protagonists Hwang Jung-min and Kim Ah-joong posing in "couple T-shirts" after it aired the first episode on April 29 amid high expectations.

Playing a couple who agree to a six-month contract marriage, the two stars dressed alike in white T-shirts for a scene where they have a picture taken to deceive people into believing they are a couple. They also wore the same green flower print shirts for another scene where they experience an unexpected incident.

"My wife and I didn't wear 'couple T-shirts' even on our honeymoon because I was too ashamed to do such an embarrassing thing", Hwang said. "It's still embarrassing, but I enjoyed posing in them. Now I'd like to get a pair of them for my wife and myself".

The two stars acted so naturally that they looked as if there were real lovers. The shooting took place in Guam, and after the shooting, they reportedly volunteered to pose with local children who came to the location to watch.