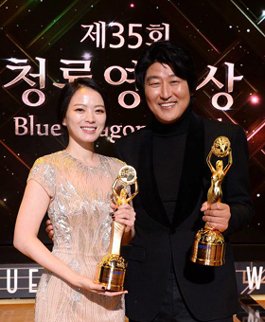 Inspired by a famous 1981 human-rights case led by late President Roh Moo-hyun, who was then a successful tax lawyer in Busan and turned to human rights law to defend the accused, the film is the sixth biggest box office hit in the history of Korean cinema. It attracted 11.3 million viewers since its release in December last year.

But the biggest surprise of the night was Chun Woo-hee, a newcomer, who won best actress for her superb performance in the indie film "Han Gong-ju", which drew a respectable 220,000 viewers.

"I never thought I could win this award", a tearful Han said in her speech. "I think this award sends me a message never to give up. I will do my best to keep on acting with confidence, without questioning. I hope this will help spark more interest in indie and art films".

Park Yoo-chun and Kim Sae-ron took home the trophies for the best young actor and actress.

Kim Han-min, the director of blockbusting history epic "The Admiral: Roaring Currents" received the gong for the best director and most popular film.

The number of viewers of Korean films this year is likely to exceed 100 million for the third year running as the figure hit 97 million as of Wednesday. 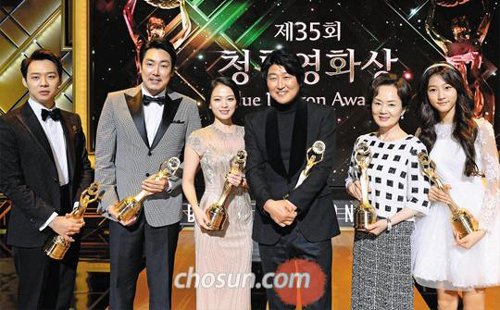 "'The Attorney' Sweeps Blue Dragon Film Awards"
by HanCinema is licensed under a Creative Commons Attribution-Share Alike 3.0 Unported License.
Based on a work from this source