'The Client' is deceptive, smart 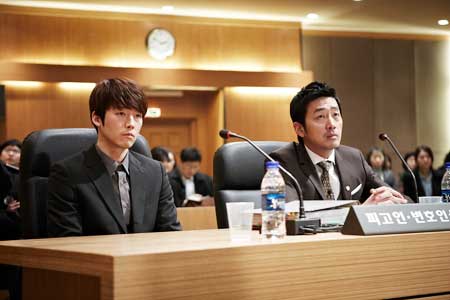 A man is suspected of killing his wife. The cadaver is however missing and solid evidence is impossible to procure. A powerful prosecutor and notoriously competent attorney engage in a fierce battle of wits to determine whether the man is guilty or innocent, with nothing but their own sense of conviction and validation.

"The Client", the country's first legal thriller, is propelled mostly by heavy legal terminology-ridden dialogue inside a glossy, wood-paneled courtroom. Unlike most variations in the genre it rules out the possibility of multiple suspects and focuses on the 50-50 chance of a man's culpability#.

There are many things at stake as the dramatic tension could be compromised by the wordy script and a predictable ending. The film's thrill factor all depends on how far it keeps the audience confused of the suspect's innocence.

Emerging young director Sohn Young-sung largely succeeds in this respect. He makes an impressive foray into the genre by offering a deviously deceptive story full of thrills and chills, all the while without losing a sense of humor.

Heartthrob Jang Hyuk breaks away from his usual action-packed roles as the mellow and mysterious Han Cheol-min. He returns from a business trip for his wedding anniversary. He enters his house with a bouquet of flowers in hand but the police, rather than his wife, greet him with an arrest warrant. The body is nowhere to be found but the amount of blood in the bedroom makes the possibility of her survival virtually impossible.

Prolific actor Ha Jung-woo plays the suave, smooth-talking star attorney Kang Seong-heui. Though he finds his client baffling and difficult to trust, Kang delves into the case with a determination to win. He ingeniously finds one piece of evidence after another that supports Han's innocence and becomes increasingly confident about defending his client.

Park Hee-soon, best known for scruffy, hardball characters, adopts a surprisingly cold facade as the merciless prosecutor. A man of power and unwavering conviction, Ahn Min-ho never for a moment doubts Han's guilt and acts quickly to turn the tables on Kang.

Not surprisingly, Ahn and Kang turn out to be longtime buddies-cum-rivals. The story becomes multi-textured as it explores how personal ambition can conflict with one's sense of justice. But the strength of the film is that is refrains from doing the most obvious, and keeps a cool, distanced observation of ulterior motives and instead focuses on harnessing these factors to confuse the viewer about the truth in the case.

The story unfolds mostly from the point of view of Kang, who at first appears to be a superficial young man to whom the entire incident is just a game he must win. Ahn on the other hand immediately invites one's trust but the story begins freewheeling down a rabbit hole as it is revealed that Ahn holds a deep grudge against Han from the past.

Jang, as the enigmatic suspect, appears innocent one moment and completely guilty the next, crowning all the defining moments of the mystery thriller. In addition to the three irreplaceable lead actors, a supporting cast of A-list talent adds to the film's impeccable production values, from funnyman Sung Dong-il and veteran actor-turned-politician Choi Jong-won to actress Yoo Da-in, the unforgettable heroine of "Re-encounter", as the late wife.

A unique aspect of the film is that it features a jury. Though "The Client" is the first legal drama to feature a jury here (the jury system was only introduced in Korea in 2008) it does not make much use of it. While some fans of American legal TV series may be disappointed, the film remains focused and avoids straying off on tangents. The presence of a jury enables the audience to feel as if they are part of the panel that the prosecutor and attorney are trying to convince.

"The Client", a Showbox/Mediaplex release, opens in theaters on Sept. 29. Two-and-a-half out of four stars.

"'The Client' is deceptive, smart "
by HanCinema is licensed under a Creative Commons Attribution-Share Alike 3.0 Unported License.
Based on a work from this source