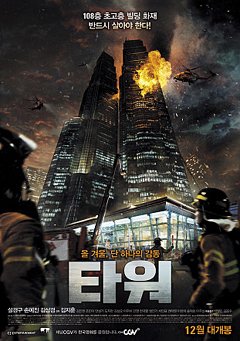 "The Tower", a disaster movie starring Sol Kyung-gu and Son Ye-jin about a fire that erupts in a luxury high rise on Christmas Eve, has kept a firm grip on the top spot at the domestic box office.

According to data supplied by the Korean Film Council, 319,127 tickets for the movie were sold on Sunday alone. It has attracted 3.54 million viewers since it was released on Christmas Day.

"Les Misérables" ranks No. 2 at the box office. It sold 199,404 tickets on Sunday and 4.21 million moviegoers have now seen the adaptation of the long-running musical based on Victor Hugo's epic novel.

"'The Tower' Still Drawing Moviegoers"
by HanCinema is licensed under a Creative Commons Attribution-Share Alike 3.0 Unported License.
Based on a work from this source