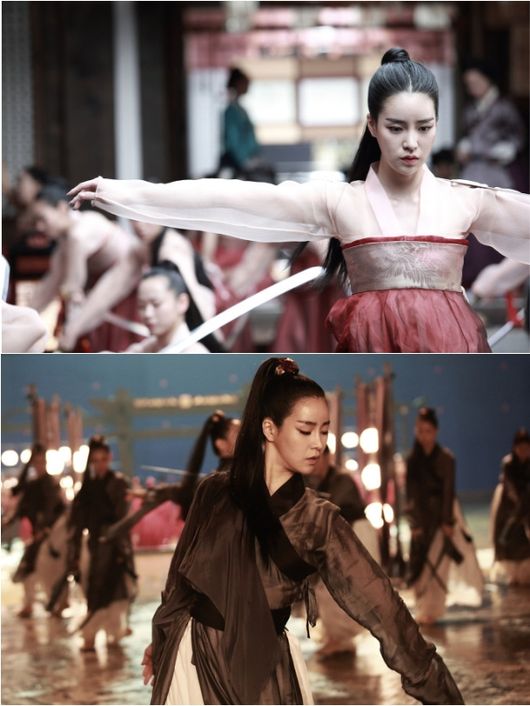 Actress Lim Ji-yeon made her exceptionally powerful presence felt in movie "The Treacherous".

Lim Ji-yeon took on the role as Dan-hee in movie "The Treacherous", which was released on May 21st. While she is a butcher's daughter from the lowly family, she disguises herself as a maiden from a noble family to enter a palace. After completing the harsh training, she joins woonpyeong (artist kisaeng during the era) and seduces King Yeonsan.

Lim Ji-yeon's agency SiM Entertainment said, "From her mysterious eyes to her gorgeous sword dance, she oozes the fascinating appeals through her engaging acting performance to shake the moviegoers' hearts" and "Contrarily to her previous innocent and whimsical image in her previous project, "Obsessed", she shows off her exceptionally courageous and charismatic presence as well as that frail image of a lady".

After she returned to the big screen after a break for almost year, Lim Ji-yeon trained for action acting and martial arts three months before the movie started filming. Her beautiful and refined sword dance in the movie is all thanks to these efforts she made.

Lim Ji-yeon said "I was trying to commit myself as an actress confidently and proudly. Since the movie is based on the real story, which was not known well until now, you'll have fun watching the movie. I believe you'll be able to enjoy the unusual entertainment that the movie has brought to you".

Lim Ji-yeon was awarded New Actress award for her role in "Obsessed" from the 51th Daejong Awards, the 34th Korean Film Critics Association Awards and the 23rd Buil Film Awards.

"'The Treacherous' Lim Ji-yeon mesmerizes moviegoers"
by HanCinema is licensed under a Creative Commons Attribution-Share Alike 3.0 Unported License.
Based on a work from this source