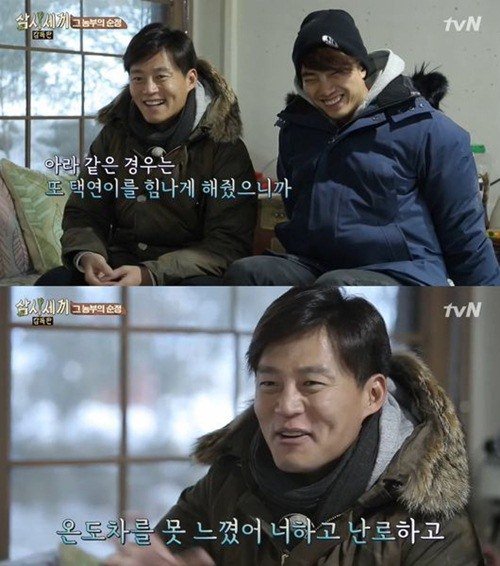 On the director edition of tvN's 'Three Meals a Day', which aired on December 26th, Lee Seo-jin and Ok Taecyeon chose Choi Ji-woo and Go Ara as their best guests.

When asked who should be the best guest, Lee Seo-jin said, "For Ok Taecyeon, it should be Go Ara because Ah-ra made Ok Taecyeon cheered up.

Ok Taecyeon tried to deny it saying, "You are making people think I live only because of Ah-ra". But Lee Seo-jin responded, "There was a text message from Yeon-hee. It said 'I didn't know you liked Ah-ra that much'".

Lee Seo-jin continued saying, "On that day, we couldn't tell the difference between your body and a furnace in temperature wise", making the audience burst into laughter.

Lee Seo-jin himself chose Choi Ji-woo as the best guest. He said "I was really worried about kim-chi preparation for winter. I was so thankful when Choi Ji-woo made Kim-chi for winter".

"'Three Meals a Day' was the beginning of the friendship. I was just happy working as the youngest", said Ok Taecyeon brightly smiling.