'Toxic Avenger' to go on stage in August 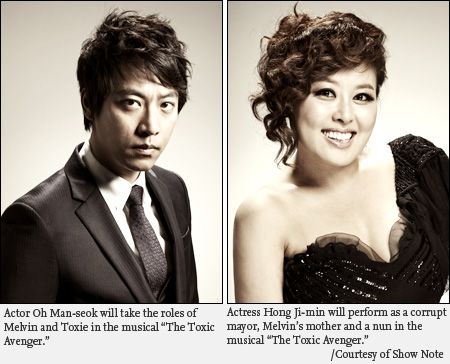 The Broadway comedy musical "The Toxic Avenger" based on the 1985 film of the same name will make its way to Korea for the first time.

When it premiered in 2009, the musical created the so-called "toxic" syndrome on Broadway. Set in Tromaville, New Jersey, the story revolves around a mutant superhero called Toxie.

Aspiring earth scientist nerd Melvin wants to save New Jersey from environmental pollution for the sake of its citizens and Sarah, the beautiful blind girl he loves. One day, he comes to discover the shocking truth at the archive of the city library Sarah works for. It is Babs Belogoody, the city mayor who permits all kinds of toxic waste to be dumped in the city in return for kickbacks. With dreams of becoming the governor, the mayor orders two goons to get rid of Melvin to hide the truth. The two goons throw Melvin into the sticky, toxic substance tank and believe him to be dead. But Melvin is reborn with superpowers as a giant green mutant called Toxie, with a deformed face and ripped body. He fights against corrupt power and environmental pollution to save the earth and is hailed as "a toxic hero" by citizens. The musical portrays the monster's heroism and at the same time the love story between Sarah and Toxie with a comical touch.

"The Toxic Avenger" won the Outstanding New Off-Broadway Musical at the Outer Critics Circle Awards in 2009 and the 2009 Theater Fans' Choice Awards on Broadwayworld.com, a U.S. performing arts website.

The musical will tour Los Angeles, Cleveland, Austin and Chicago from this fall and the foreign productions, including the Korean rendition, will take place this year following a successful Canadian performance.

The Korean production company Show Note will upgrade the musical to keep the original qualities and at the same time suit Korean tastes through its local creative team.

In the show, the five actors will make numerous costume changes, going through 135 items of clothing, a lot for small-theater musicals. It will also take just two minutes for Melvin to turn into superhero Toxie. Chae Song-hwa, arguably the nation's top special makeup artist, whose creative abilities were seen in "Hedwig and the Angry Inch", "Evil Dead" "Cats" and "200-Pound Beauty", will bring to life the monster for the show.

Actor Oh Man-seok will play both the roles of Melvin and Toxie while actress Hong Jim-min will perform as the corrupt mayor Melvin's mother and a nun.

Renowned for his role in "Hedwig and the Angry Inch", Oh is returning to the small-theater stage after a break of three years. He recently extended his horizons by directing the musicals "Happy Life" in 2008 and "Harmonium in My Heart" last year. "I want to get back to basics but explore my acting talents in this musical", Oh said in a statement.

Hong starred in the popular television drama "On Air" in 2008 and won Best Actress in the Korea Musical Awards for her role in "Dreamgirls" and her powerful soulful vocals, for the first time in 10 years since her debut. She also proved her popularity in the recent sold-out musical "Menopause". As a popular and sought out actress, she has been cast for the upcoming television drama "I Am Legend".

"'Toxic Avenger' to go on stage in August"
by HanCinema is licensed under a Creative Commons Attribution-Share Alike 3.0 Unported License.
Based on a work from this source