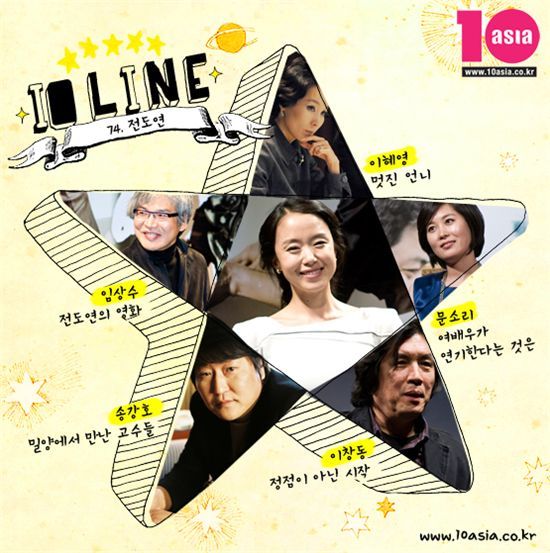 Kang Shin-hye
A reporter who worked for teenage magazine Hi-teen in 1990. She encouraged Jeon, who during her senior year in high school went to the magazine to receive a prize from a postcard contest, to become a cover model. Even though this led to Jeon's appearance in a commercial that kicked off her career in the entertainment industry, Jeon she was not thinking about living her life as a celebrity for a long time or succeeding as an actress. At the beginning of her career her strict family criticized her for spending the whole night on "a commercial with only a 15 second appearance".

Choi Yoon-seok
The director who cast Jeon on MBC's "Our Heaven" after seeing her commercial. He also cast her on MBC's "General Hospital". She played a cheerful and assertive character and became popular because of the bickering relationship between her and the late actor Choi Jin-young. She suffered from rumors over her being cast for the show despite not having been an official recruit by the broadcaster and was at the center of controversy for exposing her breast in "General Hospital" because she had played a character who suffers breast cancer. Jeon then went into a state of dejection after the plot of "Our Heaven" turned its focus to the new actors who joined the show after the producer was replaced. However, director Ko Heung-sik and scenarist Park Jeong-ran were acknowledged newcomer Jeon's potential, convincing her to appear in SBS' "Scent of Love" by saying "an actor has nothing to lose when the director and scenarist show interest in the actor".

Han Suk-kyu
Co-star in movie "The Contact". At the time, newcomer Jeon seemed to be "a proper and polite person with no exceptions". Jeon is able to secure her position as an actress after the great success of "The Contact". After seeing the scenario for "The Contact", Jeon, who was in a state of "having starting up a lot of things which were doing so-so" and "feeling lethargic as an entertainer with no vision", was able to free herself from feeling lethargic. However, without a firm ground as an actress she would feel distressed when talk would be, "Jeon Do-yeon is someone who comes out television and isn't an actress". But the story of how a regular telemarketer finds her love through computer communication was the new everyday life the younger generation was living in the 1990s that this Korean movie discovered. And by showing how Jeon naturally acted out everyday situations such as posting memos on the wall or cutting up an envelope with scissors scored her the title of a fresh new female character in the latter half of the 1990s.

Lee Hye-young-I
Co-actress in film "No Blood No Tears". Jeon, who thought "one of the reasons an actress' career is short-lived is because of the notion that an actress is the pretty one on screen", took on a role in the movie where she and Lee Hye-young-I play characters who face up against the rough world of men. Jeon was constantly beaten up by her co-star Jeong Jae-young and would sometimes curse. She then played a double role in film "My Mother the Mermaid" and first-handily dove into the ocean for the role as a female diver. Thinking that "there is a limit to what one can show with tears", Jeon starred in different productions including "No Blood No Tears", "My Mother, the Mermaid" and "Untold Scandal" which widened her scope of acting while trying "not to play an image that overlaps with her previous roles in melodramas". Her technique also reached the level of full maturity which director Ryoo Seung-wan of "No Blood No Tears" said, "She calculates the reaction [she needs to show] for a movie with nearly 2,000 cuts". This was the new path that this actress, who said she "started off by hearing 'Jeon Do-yeon can act well' instead of 'Jeon Do-yeon is pretty'" found when she was around thirty.

Lee Chang-dong
Director of movie "Secret Sunshine". Jeon Do-yeon said that she did not have the confidence to act in "Secret Sunshine" after reading the scenario, but director Lee said, "If you said that you were confident about this role then I wouldn't have believed you" and encouraged her. And she won the best actress award at Cannes Film Festival for her role in the movie. Instead of showing off her good acting skills in "Secret Sunshine", she showed acting which falls in line with Lee's words: "Jeon Do-yeon, her acting skills are terribly good. Impeccably good. But that is all. So stop trying to act". Through the movie, she kept her facial features which is what the audience recognizes her by but acted as if she had actually lost her child. And Jeon was able to endure the role of a female character who has lost her husband and child, cannot forgive anyone on her own will and someone who could not be easily comforted. It was the kind of acting that only Jeon Do-yeon can pull off, not any other actor or actress. Just like movie producer Shim Bo-kyung said -- "I knew that Jeon Do-yeon had much more to show us in the future" -- Jeon had stepped into an entirely new territory.

Song Kang-ho
Co-star from "Secret Sunshine". She jumped up from her seat after watching Song Kang-ho's acting in "Memories of Murder" and before "Secret Sunshine" premiered in theaters Song said, "Actor Sol Kyung-gu has the movie 'Peppermint Candy.' Jeon Do-yeon has 'Secret Sunshine.'" Both actors maintain their unique characteristics such as their form of speech in most of their works but manage to know how to blend naturally into their films or dramas. Moviegoers are aware that actors Jeon Do-yeon and Song Kang-ho were in "Secret Sunshine", yet they concentrated as if the two live within the world that exists within the film. No matter what role they play, their characters are remembered for the fact that they are played by Jeon and Song and their acting continues to gain depth. But for Song, he can star in films such as "Secret Sunshine", "Thirst" and "Secret Reunion" which mix in action and comedy, but it is hard for a Korean actress to find such a production. For an actress like Jeon, the influence she can have on the general public is maximized through her roles in dramas like SBS' "Shoot for the Stars" and "Lovers in Prague" which contain romance throughout. Both actors act very well. The only difference is that they have different genders. However, the gap that difference creates is larger than you think.

Kang Si-kyu
Jeon Do-yeon's husband. Jeon, who thinks "You die if love is missing from your life", was going to quit acting after getting married because she thought "marriage is the way to run away from work". However, she decides not to bet her whole life on marriage after thinking there might not be anything outside work she may be able "to be crazy about" and that is when she meets Kang. It was while she was filming "Secret Sunshine" that she became close with Kang. He gave her much comfort when "my devasted inner side unconsciously felt the need to be consoled". Jeon says he is "a guy who is fun but also seems trustworthy and faithful".

Moon So-ri
The first actress that Jeon who "gets into a state of panic in front of pretty women". Both actresses were acknowledged for their undeniable acting skills through Lee Chang-dong's films. But even after, film "Apple" which Moon starred in was not able to be released for a long time and Jeon had a hard time because she was not being handed scripts despite having won best actress as Cannes. Jeon also did not appear on too many TV commercials in consideration of her future acting roles. But Jeon continues to act because "the set is fun" and cried because after meeting veteran actress Hwang Jung-soon, she "felt bad to have moaned that all I have left to do is get married when after my 13-year career, I see no limit to the job of an actor". That is how this actress who had not planned on staying a celebrity for too long and was not greedy to gain more popularity was continuing to pursue her acting career.

Im Sang-soo
Director of movie "The Housemaid - 2010". Even after making its premiere, "The Housemaid - 2010" is still highly disputed, but it is certain that the film would have not been made without Jeon. Amongst actresses who are as popular as her, it is difficult to find one who will choose such a production nor be so brave about shooting skin-baring scenes. On top of that, she maximizes her characteristic of seeming 'clueless' because she is not knowledgeable about the ways of the world. Through "The Housemaid - 2010", Jeon displays what she has accumulated throughout her career in the most extreme way and this film seems like her way of experimenting to see how it will be perceived by the audience. Jeon has always been great but what will she be able to show us after "The Housemaid - 2010"?

"[10LINE] Korean actress Jeon Do-yeon"
by HanCinema is licensed under a Creative Commons Attribution-Share Alike 3.0 Unported License.
Based on a work from this source