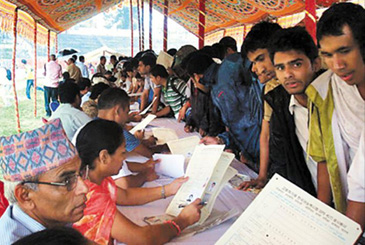 The Human Resources Development Service of Korea on August 23 (Tuesday), 2011 published the results of the Korean Language Test (KLT) held last month. A total of 15,298 individuals have passed the exam making them eligible to go to Korea to work, according to the Ministry of Labour and Transport Management.

Over 50,000 candidates sat for the test held from July 22-23 hoping to get a job in Korean firms under the Employment Permit System (EPS). Recently, Korea increased the job quota for Nepal to 15,000 because of the good track record of Nepali workers and fast sending procedure. Korea had offered 4,000 EPS job openings last year.

According to the ministry, 13,298 of the successful candidates will be allowed to work in manufacturing and 2,000 in agriculture after passing a medical test. Korea has been hiring Nepali workers under the EPS provision since 2008, and so far more than 9,000 persons have obtained jobs.

"Korea is also positive about hiring more workers in the next lot", said Krishna Hari Pushkar Karna, assistant spokesperson for the ministry.

Anil Giri serves as Kathmandu Correspondent for The Seoul Times.As a journalist he has worked for such news media as Annapurna Post, BBC, and Himalayan Times for years. He finished his both undergrad Economics degree and his MA degree in English Literature at Tribhuvan Univ., Kathmandu. He also holds a diploma in Development Journalism from prestigious Indian Institute of Mass Communication-IIMC, New Delhi, India.

"15,298 Nepalis Pass Korean Language Exam"
by HanCinema is licensed under a Creative Commons Attribution-Share Alike 3.0 Unported License.
Based on a work from this source