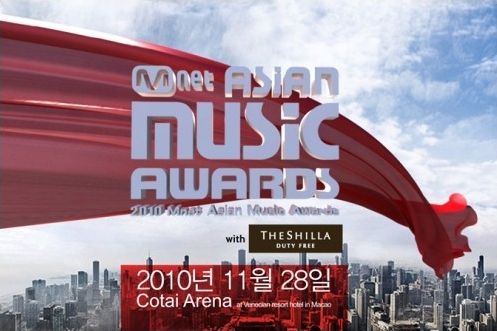 The first line-up of guests attending the 2010 Mnet Asia Music Awards (MAMA) have been revealed.

The official website of the Ment's annual music festival showed that Korean artists 2PM, 2NE1, miss A, Taeyang and Tiger JK will attend the event while international singers include Zhang Jie and iMe from China, Perfume and Chemistry from Japan and American hip-hop quartet Far East Movement.

Last month, Mnet Media's head Park Gwang-won announced that the music festival will be held in Macau this year at the Cotai Areana in the Venetian hotel on November 28 and be jointly produced by broadcasters in Korea, Japan and China.

Hong Kong's TVB, Singapore's Mediacrop, the Philippines GMA and Cambodia's CTN, all main public networks of their respective countries, as well as payTV and IPTV channels will air the show live this year.

The show went on air live to Japan and China starting 2008 and is now broadcast to a total of ten countries throughout the region.

Some of the biggest names in the Korean music industry including Rain, Super Junior, 2PM and 2NE1 have been nominated for various categories of the awards ceremony.

Awards will be handed out based on fan votes, charts of the artists' rankings, and single and album sales.

"1st line up for Mnet Asian Music Awards revealed "
by HanCinema is licensed under a Creative Commons Attribution-Share Alike 3.0 Unported License.
Based on a work from this source